The Music Will Find You

Several new releases piqued my interest this month, so I decided to seek out a few that I knew would be good. Before I discuss the music, however, my experience buying it is worth mentioning. Traditional methods of purchasing music are dying quickly. Have you noticed how drastically stores like Borders have whittled their music sections? What used to take up half of the store is now relegated to a tiny corner that offers only a handful of popular titles. Both independent and corporate-owned record stores are closing in droves, and buying music at a physical store is becoming a thing of the past. I’ve certainly been aware of the dire straits the music industry has been in for some time, but I’m still surprised by the state of retail stores. 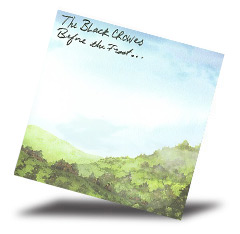 But the good news is that prices are low. I purchased four new albums (well, technically five, as you’ll see in the first review below) for under $50. Ten years ago, CDs were nearly $20 each. And while I think the transformation of the purchasing experience puts more power in the hands of the artists and more money in the pocket of the consumer, I also miss the satisfaction of buying a physical product instead of a digital download. I like to hold the case in my hand, turn the pages of the liner notes, appreciate the weight of the package, and smile to myself in the mirrored disc, wondering how long it will be before all those elements are as outdated as 8-track tapes and gramophones.

The two newest albums from southern rockers The Black Crowes offer perfect examples of new ways of delivering music to fans. When you purchase the 11-track album Before the Frost . . . (Silver Arrow 61363), you receive a card with a code for a free download of a second album (essentially an extension of the first), . . . Until the Freeze. Both studio albums were recorded over the course of five nights in front of a live audience of fans at Levon Helm’s studio in Woodstock, NY. This innovative approach to recording results in a refreshingly raw sound. The presence of an audience is barely apparent until you hear the applause at the end of each song; I imagine they were in hushed awe at being behind-the-scenes witnesses to such a phenomenal experience.

Creative methods of recording and distribution are par for The Black Crowes, who, despite being in the industry for over 20 years, have managed to stay ahead of the curve. Even the songs bend the boundaries of genre. On Before the Frost . . . , “I Ain’t Hiding” struts a funky disco rhythm with lead singer Chris Robinson wailing in his signature style. . . . Until the Freeze offers eight more original Crowes cuts and one cover version of the Stephen Stills classic “So Many Times.” Talk about bang for your buck! 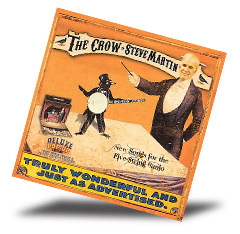 Steve Martin is a wild and crazy guy who also happens to play the banjo surprisingly well. He released his first full-length album, The Crow: New Songs for the Five String Banjo, on Rounder Records (Rounder Select 886693) last year, and it showed that he’s capable of writing and making music on the instrument rather than simply using it as shtick in his comedy routine. Martin recruited an arsenal of accompanists and guest vocalists including Dolly Parton, Tim O’Brien, Tony Trischka, Vince Gill, and iconic banjo master Earl Scruggs. The album even earned a Grammy Award for Best Bluegrass Album! The instrumental tracks are spirited and well arranged, while the vocal pieces are funny and original. “Late for School,” about a kid who rushes to school only to realize it’s Saturday, is vividly comedic, and it’s the only song Martin sings. The duet, “Pretty Flowers,” brings Parton and Gill together for an old-fashioned love song, and it features the beautiful dobro work of Jerry Douglas. The liner notes detail Martin’s inspiration for writing each song, and I laughed out loud several times while reading them.

An album that’s no laughing matter is Johnny Cash’s posthumous release, American VI: Ain’t No Grave (American Recordings B0013954-02). This is the final installment in the series of collaborations with producer Rick Rubin, and it’s the final studio session the Man in Black recorded. Cash gives an intimate performance; his voice is deep and melancholy, and the overlying themes fixate on death and spiritual contemplation. This is not a disc to play if you’re feeling a little blue; it leaves you feeling hopeless, despite Cash’s raspy insistence that “hope springs eternal.” The accompaniment is sparse and the outlook is bleak, but though the songs are major downers, the album is expertly recorded and offers a haunting farewell from a man whom many will always consider a legend. 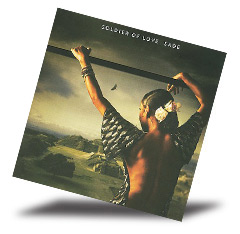 Finally, I couldn’t resist the new Sade album. I’ve been a fan since the 1980s, and her tasteful talent proves unmarred by time. Soldier of Love (Epic 763933) is her first release in ten years, and it’s just as solid as her older work. The title track is a gritty anthem to love conquering all with appropriate military march drum-machine beats and guitar effects that sound like a sitar. Sade’s voice betrays no age, and her fellow musicians, Stuart Matthewman, Andrew Hale, and Paul Denman, have been with her since the beginning. The album topped the charts worldwide in February, and it’s a worthy inclusion for Sade’s flawless catalog of recordings.

Clearly, I’m well stocked with good new music for at least a little longer, but when the time comes to re-up, I know the music will find me.