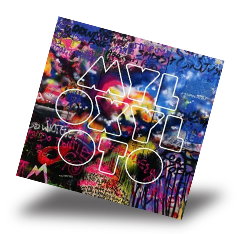 Sustained success is not a common story in the music industry, and for each multi-platinum artist there are scores of performers who achieve brief notoriety before resuming their places in obscurity. The British band Coldplay is decidedly in the former category, and their fifth studio album, Mylo Xyloto, was something I’d been looking forward to all year. While the album’s character remains classic Coldplay, showcasing Chris Martin’s singular voice, the rest is filtered through the lens of Brian Eno, producer of the band’s last album, several U2 albums, and an artist in his own right whose list of ambient electronic works begins in the 1970s. Eno brings that background in ambient music to bear here, with almost every song playfully exploring different types of sound and space. This lends the disc a lingering, ethereal quality that sets it apart from other contemporary music.

"Paradise" and "Princess of China," the latter featuring Rihanna, are replete with radio-friendly lyrical repetition that makes for easy foot tapping without ever really challenging convention. "Hurts Like Heaven" and "Every Teardrop Is a Waterfall" both adopt a quick tempo and an upbeat demeanor that are pleasing to the ear, while "Don’t Let It Break Your Heart" highlights Eno’s production presence in a song that would sound suspiciously at home on a U2 record. Mylo Xyloto deviates from the mainstream without straying so far as to break new ground. But despite the lack of creative initiative present, Martin’s trademark voice continues to impart an infectious joy that ensures that most fans won’t be disappointed with Coldplay’s latest effort.