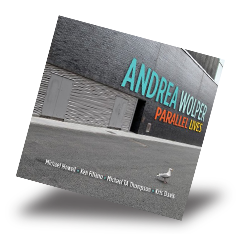 I can’t begin to count the number of "girl singer" discs that arrive here during a typical month. If it’s not in the dozens, it seems so. Some of them are good, but we have limited space and a disc needs to be quite good to make the cut. Andrea Wolper’s standout set is a disc everyone should hear. She’s got a warm and versatile voice, which on this set carries her all the way from crooning a ballad like "Skylark" to scatting and making exuberant vocal sound effects on "Blue Wind." She’s a terrific arranger, taking new paths rather than expected ones ("Who Will Buy?" from the Broadway musical Oliver becomes a sexy, lazy samba), and she’s a composer as well, contributing three originals to the disc. Moreover, she’s a talented program builder, picking good but not overexposed tunes that range all the way from Joni Mitchell ("Song to a Seagull" and "Be Cool") to Buffy Sainte-Marie ("Maple Sugar Boy"), and she even adds a nod back to Richard Rogers ("Something Good"). Her band is tight, consisting of musicians who can be part of the whole or set out in a blaze of glory on a solo riff. The sound that conveys all of this talent is warm and focused, and it presents a stage that has appealing depth, with the drums sounding behind the piano but no less clear than if they’d been in front. This one’s a winner; don’t let it pass you by.