Zach Williams and the Reformation: "A Southern Offering" 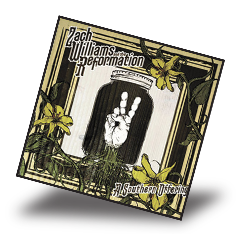 Southern rock bands were commonplace 30 years ago, but they’re not so easy to find in 2011. Hailing from Arkansas, Zach Williams and the Reformation might be just the band to bring back this genre, or perhaps to prove that it never really went away. In ZWR’s case, you can tell a lot by scanning some the song titles, which include "Gravy Train," "Mason Jar," "The Fix," "Rock’n’Roll Me," and "Motels and Highways" (naturally about life on the road). Fans have compared ZWR to the Allman Brothers Band, Lynyrd Skynyrd, and Molly Hatchet. You can easily hear clear references to those bands, but I think ZWR has its own style built around one thing: energy. From the driving opener, "Gravy Train," to "Wishing Well," the tenth track, there are pounding rhythms and high energy. Then surprisingly, and perhaps defiantly, the album closes with its only quiet tune, "Sky Full of Treasures." ZWR is heavy on guitars, but Williams has no trouble punching through as lead singer. His voice is strong, and he’s been compared to other Southern-rock greats. But I find that his voice, especially when it’s near breaking, reminds me of Bob Seger. The recording is loud and raucous, with some intended guitar distortion for aural color. Though ZWR might recoil at the thought, I found this album perfect to load on my iPod Nano for the gym. You can find it on iTunes and at Zach Williams and the Reformation’s official website.