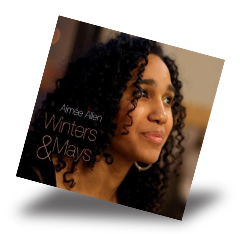 Aimée Allen has law degrees from Columbia University and the Sorbonne in Paris and has pursued a career in music since she was very young. Now she’s a practicing attorney by day and a jazz singer on the New York scene at night. She has a warm, honeyed voice, a singular sense of pitch, and a vivid imagination that lets her see such disparate songs as "Bye, Bye, Blackbird," and "It Could Happen to You" as a good performance pair. On Winters & Mays she sings covers of tunes like "Peel Me a Grape," "Two for the Road," and "Samba em Preludio," alternating between her own compositions and one by her brother, guitarist David Allen. For me, the best original is "That Day," which aptly describes the moment of falling in love as a life-changing experience. "Second Time Around" and "Stardust Reunited" also make for highly enjoyable listening. A lot of the music sways in a gentle bossa nova, with Allen’s backup band showing its mettle. The recording is just close enough and very warm while retaining definition, but when accordionist Victor Prieto first joins the group on "Samba em Preludio," he sounds detached, as if he’s in another audio world. This disconnect is odd because his other two appearances on the disc are well integrated with the other musicians.