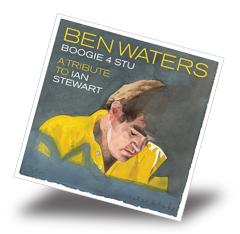 In Life, his autobiography, Keith Richards writes "I don’t think the Stones would have actually coagulated without Ian Stewart pulling it together." Keith, Mick Jagger, and Brian Jones played with Stewart, a great blues and boogie-woogie pianist, before they ever played with Charlie Watts and Bill Wyman. Andrew Loog Oldham felt Stewart didn’t fit the Rolling Stones’ image, so Stewart served as the band’s road manager and played on nearly all their recordings until his death in 1985. Ben Waters, a 35-year-old British pianist, put together this tribute to Stewart, enlisting the help of some of his blues- and jazz-playing kinsmen, among them Watts (who plays on six tracks), Wyman, Richards, and Ronnie Wood. Jagger joins them, along with a great horn section, for a swinging version of Dylan’s "Watching the River Flow." The high point of the disc is a live performance of "Bring It on Home to Me" from 1984 by Stewart and his band at Montreux. Stewart displays an ease in his playing that Waters hasn’t quite achieved, but Waters is game and he plays with great feeling. The whole disc is easy and unforced, and another highlight is Richards and Wood trading vocals on "Worried Life Blues." The sessions were warmly recorded at Jools Holland’s studio, and expertly mixed by Glyn Johns. Proceeds benefit the British Heart Foundation.