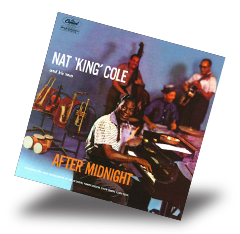 Analogue Productions continues its SACD traversal of Nat "King" Cole’s Capitol recordings by issuing After Midnight, which presents Cole with his stellar trio, adding a musical guest on each track. Today, Cole is remembered by the general public as one of the greatest pop music balladeers in history. But Cole got his start as a jazz piano player and leader of a jazz trio. This recording, made in 1956 and released in 1957, finds Cole enjoying the best of both worlds. Cole’s voice floats effortlessly over the sounds of the small instrumental group, and it has a clarity often partially obscured in his later recordings with large string sections. His trio consists of John Collins on guitar, Charlie Harris on bass, and Lee (Leonidas) Young on drums. The guest roster includes Willie Smith (alto saxophone), Harry Edison (trumpet), Stuff Smith (violin), and Juan Tizol (trombone). The song list mixes the tried and true ("Sometimes I’m Happy," "It’s Only a Paper Moon," "Caravan," "Route 66") with the less familiar ("Lonely One," "Don’t Let It Go to Your Head"). Virtuoso musicianship runs high for these sessions, but the overall mood is mellow and close. The sound is mono, but it’s so clean, clear, and balanced that it might strike you, like it did me, as absolutely wonderful. The copious notes include an enthusiastic essay by Ralph J. Gleason. This was one of those rare studio recordings where everything went right, and the careful mastering from Analogue Productions lets you hear that everything with absolute accuracy.