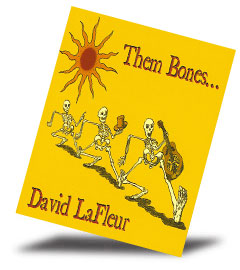 David LaFleur is a singer-songwriter whose music is mostly in the folk genre, and his self-released, professionally produced new album, Them Bones . . ., is comfortable and appealing. LaFleur sings and plays traditional favorites such as “Rovin’ Gambler,” “Darlin’ Corey,” and “Oh Freedom,” as well as seven of his own compositions. These range from highly personal tracks like “The Quilt Song,” which likens the patchwork in the quilts his mother wove to pieces of her soul, to the very funny “Shepherd’s Pie Revisited,” in which the singer is warned not to eat the shepherd’s pie at Mom’s Place but forgets a year later and orders it, much to his regret.

LaFleur handles lyrical ballads and humor with equal aptitude, and his clever asides on the funny tracks could become his signature. Though he usually performs solo, he’s assembled a group of fine musicians for this disc, which features accompaniment from bass, drums, mandolin, cello, organ, and piano. There are even backing vocals, most notably on the title song, which is the most fun track I’ve heard in a long time. LaFleur’s own guitar and Dobro playing is sure and accomplished, and he’s particularly skilled at slide guitar, which gets a good workout in his arrangement of “Double Down or Fold.”

Since Them Bones . . . is self released, you aren’t likely to find it in stores. Go to CD Baby or LaFleur’s site to pick up a copy.