Andy Farber and His Orchestra: "This Could Be the Start of Something Big" 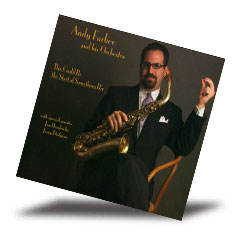 Andy Farber and His Orchestra open their new disc, This Could Be the Start of Something Big, with a lively, jumping piece of Ellington-inspired swing. “Bombers” features lock-step ensemble playing from the full band and great solos by Farber (on alto), Harvey Tibbs (trombone), and Kenny Rampton (trumpet). Pianist Kenny Ascher plays a smart, swinging solo on Farber’s “Space Suit,” which also features a warm clarinet outing by Dan Block. Farber has arranged the sections of the band precisely, and engineer Chris Allen at Sears Sound has placed them cleanly and well in the soundstage. Coleman Hawkins owns “Body and Soul,” but Farber’s own feature on his band’s version is a warm tribute and not a mere rehash. The title track was jazz lover Steve Allen’s gift to the music, and guest Jon Hendricks, with whom Farber has appeared, grabs hold of it to show us he still has his chops at age 89. Another Farber tune, “It Is What It Is,” is full-on Basie style, and Ascher has the earlier pianist’s easy touch down pat. Block, on tenor this time, plays a warm, melodic solo that leads to another impressive ensemble demonstration by the band. This Could Be the Start of Something Big is the work of a band that loves big-band jazz, doesn’t treat it like a museum artifact, and swings it hard.