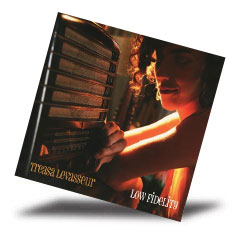 Canadian soul and blues singer Treasa Levasseur sure knows how to write a hook. Her second self-released disc, Low Fidelity, contains eight prime examples of her song craft, which she and producer David Gavin Baxter (he also plays guitar on the disc) set to smart, witty arrangements. She also covers two tunes by other writers, "Help Me Over" by Corin Raymond and Sean Cotton and "Talk to Me, Babe" by Bob Snider. All ten tracks show a keen ear for how to arrange and present a song. Levasseur plays to her greatest strength: her strong, slightly raspy voice, which can belt out one moment and caress the next. When she growls out a line, it doesn’t sound forced, and she can let her voice rise to a shout without losing track of the melody. Baxter and Sean Cotton both have a good grasp of Southern soul guitar, and Paul Reddick’s funky harmonica spices things up on "Good Ones Never Share" and the title track. "Rest of the Ride" even shows a sure touch with country music. You’ll be humming almost every tune in the car after just one play, but Low Fidelity holds up to repeated listens, in part because the recording reveals subtle details over time.