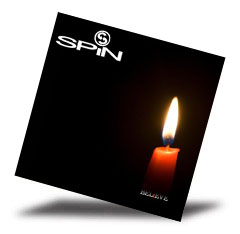 Spin is a Philadelphia-based band that bills itself as "rock / power pop / alternative." Believe is the band’s first full-length disc, and it’s a very commercial bid for attention. The guitars are loud, the synths sound vintage, and the songs follow heavily trod paths. But that doesn’t mean Believe doesn’t occasionally click. The loopy synth lines on "Hurt by You" and the title track are charming and fun, and the songs often hit their marks. "Over and Over" is an effective anthem-like rocker with good, chunky guitar lines; "Wake Up Girl" takes you back to the MTV '80s; and "After All" and "Ava" hint at the unique songwriters the band could be if they really tried. The harmony vocals, buried in the mix, are a strong point, but the overdriven guitars too often overpower them. The band’s loud/soft dynamic is reminiscent of another Pennsylvania band, Live, but Spin shows the potential to be a group of better songwriters with more staying power. The band members handled all the recording chores, and next time they might clean things up a bit by hiring an outside engineer and putting more space around the backup vocals. Spin has been getting some good press on the East Coast, and another couple of discs may justify that buzz.