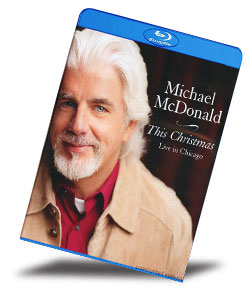 This concert was part of the Sound Stage series, and it makes for a diverse and different holiday release. The playlist might fool you into thinking that a good portion of the event is given over to traditional holiday songs, but that’s not so. The songs might be traditional as far as titles go, but the music has been energetically reinvented. Not too surprisingly, considering McDonald’s presence, the selection of holiday songs is bookended by sets of tracks made popular by the Doobie Brothers. The concert gets rolling with "It Keeps You Runnin’," followed by "I Keep Forgettin’," and "Sweet Freedom." After these R&B/rock chestnuts, the holiday portion begins with "Every Time Christmas Comes Around." Along the way we’re given an R&B version of "Come, O Come Emanuel," a spirited Dixieland version of "I’ll Be Home for Christmas," and a foot-tapping "Cajun Christmas." After a medley of "White Christmas" and "Winter Wonderland," the concert closes with resounding versions of more Doobie Brothers anthems -- "Minute by Minute," "What a Fool Believes," and "Takin’ It to the Streets."

Throughout the concert, McDonald exhibits exceptional energy and expertise that strikes fire in the other musicians. The event was expertly filmed, and the transfer to Blu-ray is just short of exemplary. The disc offers three choices for sound: DTS-HD Master Audio 5.1, Dolby Digital 5.1, and PCM 2.0. But forget the last two -- it’s the DTS tracks that have the most presence.