Frank Sinatra: “Sinatra at the Sands” 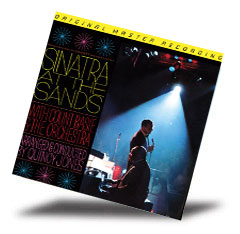 Sinatra at the Sands was the singer’s third recording with the Count Basie Orchestra, and as on the previous two, Quincy Jones arranged and conducted that great band. Mobile Fidelity’s reissue of the two-LP live set from 1966 captures the ambiance of the Copa Room at the Sands and the timbral qualities of the instruments. The drums on my Reprise pressing, probably from the early ‘70s, are more forward and snappy, but here they’re integrated into the sound of the band and back a bit further on the stage. The mastering, by Rob LoVerde, keeps Sinatra’s voice razor sharp and center stage, but removes the small bit of graininess that exists on the Reprise pressing. Freddie Green’s guitar is clearer on “I've Got a Crush on You,” the sections of the band are more distinct on “The Shadow of Your Smile,” and the audience applause and other reactions have a depth that puts you in the room with them. You can hear more clearly that the laughter at one point in “I’ve Got a Crush on You” was spliced in, but it was already audible in the original. I have an early-generation CD that actually sounds less compressed than the LP, but the prize for detail, sense of space, and dimensionality goes to this pressing. It’s essential for any Sinatra fan with a turntable.