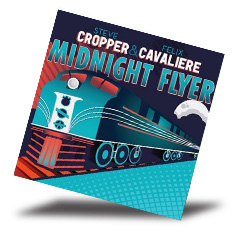 Between them, Steve Cropper and Felix Cavaliere have many years’ experience playing soul music, but Nudge It Up a Notch, their 2008 contribution to the resurrected Stax Records, was their first collaboration. Though the songs were strong, they were marred by too much compression in the mastering. Tom Hambridge helped produce Midnight Flyer, and the sound is a vast improvement, if perhaps a touch bland.

The songs aren’t quite as consistent as those on the duo’s debut, but there’s still plenty to like. Cavaliere is in great voice, and his performances on "I Can’t Stand It" (a duet with his daughter Aria) and "I Can’t Stand the Rain" are seminars in how to sing a soul tune. Steve Cropper’s solos are models of elegant understatement and feeling, and his rhythm guitar playing is the pulse that keeps things moving. The old-style backing vocals help ground the music in tradition, but on many tunes I found myself wishing Cavaliere had used traditional keyboards. "Early Morning Riser" and "I Can’t Stand It" derive a lot of their energy from his Hammond organ playing. The songs on Midnight Flyer take a few listens to grab you, but they’re well constructed by two old-time craftsmen, with assistance from Hambridge. How about a horn section next time?