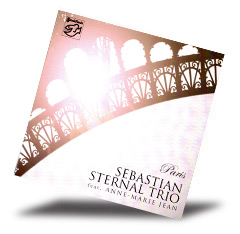 Many musicians have paid tribute to Paris, among them composers as disparate as Frederick Delius, George Gershwin, and Michel Legrand. Now German pianist Sebastian Sternal has added his two cents to the mix with a seven-track album inspired by different neighborhoods in the French capital. He has with him the other two members of his virtuoso trio, Sebastian Klose on upright bass and Axel Pape on drums and percussion, and for authenticity he's added French singer Anne-Marie Jean on three of the cuts. Thanks in no small part to splendid recorded sound, the shimmering, slightly dreamy rambling all goes down easily, but I didn't find it memorable five hours later. The lucid sound is a bit different from most piano-trio recordings in the way the instruments are placed in the sound field. The piano, usually in the center, is to the right; the drums are to the left; and the bass anchors the center, as does the vocalist on her numbers. But in the hands of master producer Günther Pahler, it works well.