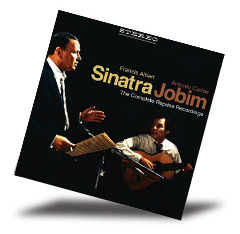 "I haven't sung this soft since I had the laryngitis," Frank Sinatra joked after his first session with Antonio Carlos Jobim. Sinatra's choice to do bossa nova was in contrast to what Stan Coryn, in his liner notes to Sinatra/Jobim: The Complete Reprise Recordings, calls "the kapow style of Sinatra up at The Sands." Jobim played guitar and brought Dom Um Romão to play percussion, while Sinatra supplied his own musicians, including guitarist Al Viola, and conductor Claus Olgerman. Francis Albert Sinatra & Antonio Carlos Jobim was one of the singer's most popular albums of the 1960s, and he sounds completely at ease in Olgerman's settings. Two years later Sinatra and Jobim teamed up with Eumir Deodato for another run at bossa nova, but Sinatra was less satisfied with the results. Seven of the songs made their way to Sinatra & Company in 1971, but three have never been released until now. Sinatra may have been right about the three unreleased tracks. He sounds less than confident on them, and he and Jobim don't click on "Off Key (Desafinado)." But most of the tracks are prime Sinatra, and fans will want the three new ones. The mastering is quite good, and Coryn's liner notes are entertaining. I have Francis Albert Sinatra & Antonio Carlos Jobim on vinyl in mono and stereo, and I'm very pleased to add this disc to my collection.