Freedy Johnston: "Rain on the City" 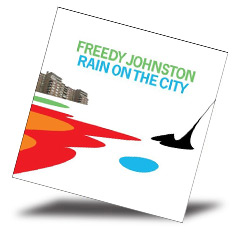 Rain on the City is Freedy Johnston’s first CD of new material since 2001’s Right Between the Promises, and it marks his return to Seattle’s Bar None Records after a four-CD run with Elektra. The title track is a medium-tempo ballad with vignettes of street scenes and romance, as the rain itself becomes a character and observer. “The Devil Raises His Own” sounds like an acoustic take on Gamble and Huff, and as with many of Johnston’s songs, its lyrics show a sharp storyteller’s eye.

Rain on the City is a deceptively spare recording, but small, rich musical touches keep popping up with repeated listens, and the space around Freedy’s voice gives him and the details of his songs the room they need. “That’s the Kind of Love We’re In” channels Jobim, “It’s Gonna Come Back to You” is rousing C&W, and it all fits Freedy, or maybe he just tailors it to himself. Either way, Rain on the City is a strong, welcome return from a songwriter who deserves a much wider audience. Richard McLaurin has tastefully produced the album, giving it a clean, unfussy sound, with instrumental support from him and other Nashville players.