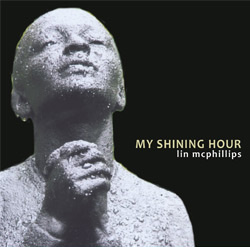 Lin McPhillips spent 35 years in the Bay Area singing jazz, and she did a stint in the 1970s and ’80s with the jazz fusion group Solar Plexus, where she used synthesizers and electronics to create wordless vocals, becoming in effect a co-soloist with the other band members. McPhillips, who now resides in the Pacific Northwest, took 20 years off from performing so she could raise a family and teach singing, but she’s returned full force with My Shining Hour, a collection of 11 tracks of traditional vocal jazz.

Her version of Russ Freeman’s "The Wind," a song covered by a number of jazz instrumentalists and by singer June Christy, is light, with woodwinds setting the tone. McPhillips grabs the tune, singing it with a winning confidence and a playful feel for the bossa nova rhythm. Her scat singing leads to a nicely developed guitar solo by Scott Sorkin, who arranged well over half the disc and whose solos are consistently impressive.

McPhillips dedicates a medley of Ellington’s "I Don’t Miss You" and "Solitude" to her father, and she sings it accompanied only by a piano for most of the tune. Her vocal control, along with her understated emotion, lets the beauty of the two songs carry her along. McPhillips caresses the melodies of the songs on My Shining Hour and lets the lyrics lead her emotions. She never lets her technique overpower a song’s story. Consequently, I found her straight singing preferable to her scat singing, which is sometimes multi-tracked and otherwise enhanced.

The musicianship throughout My Shining Hour is of the first order, and the recording is outstanding. Woodwinds and keyboards sound natural and resonant, bits of percussion are solidly placed, and McPhillips is strikingly present in the room. I hope this is the beginning of a long return to music for her.