Usually, I think of Arcam as producing high-value integrated amplifiers. Sometimes I forget that they have a long history of producing high-quality digital audio gear -- their reasonably priced CD players and, later, their DVD-Audio, and universal DVD and SACD players, were some of the best available at the time, and Arcam continues to produce high-quality optical-disc players with their latest BD-and-SACD models. And while, as a maker of digital source components, they’re better known for their optical players, they were one of the first to produce a standalone DAC. A few years ago, Arcam returned to the DAC market, first with the compact, entry-level rDAC, followed by the more expensive, full-size FMJ D33. The latter was reviewed very positively by our own Hans Wetzel, who now uses the irDAC, a later version of the rDAC, as one of his reference DACs. 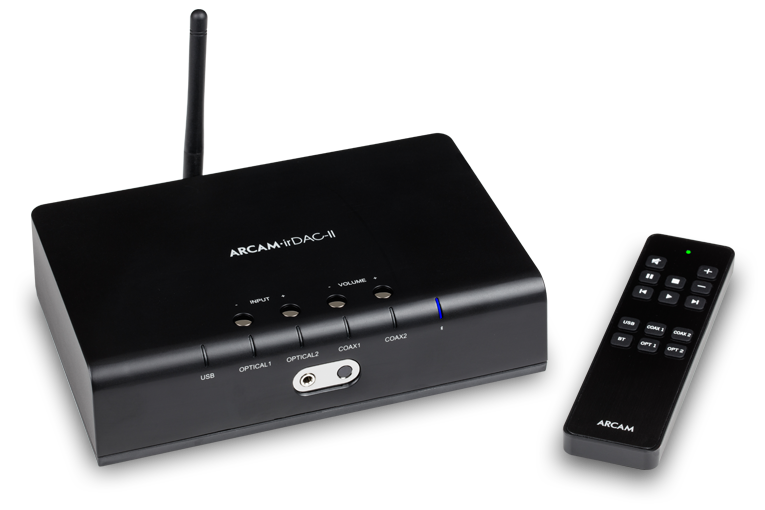 Recently, Arcam updated the irDAC to the irDAC-II, which looks very much like its forebears; last January, when I saw the irDAC-II at the 2016 Consumer Electronics Show, it didn’t blow me away. However, I made a mental note of it -- among other things, Arcam has added variable output and a headphone output, two features highly desirable in a modern DAC. The irDAC-II also costs no more than the irDAC -- $799 USD -- while adding a host of other features, such as an all-new DAC chipset, and support for DSD and Bluetooth. Although it had been a while since I’d reviewed a standalone DAC, when Arcam offered to send me an irDAC-II for review, I considered all that it has to offer and took them up on it.

Arcam’s first standalone DAC, launched nearly 30 years ago, was aptly called the Delta Black Box, a name that also describes the irDAC-II. Though considerably smaller than the Delta, the irDAC-II is still essentially a little black box. Measuring just 7.6”W x 1.7”H x 4.9”D and weighing only 2.4 pounds, it has four buttons near the front edge of its top panel: two to select inputs, and two more to adjust the volume. Curving around the front edge itself (the curve, too, is new) are LEDs to indicate which input has been selected. The buttons for volume control are new; the irDAC lacked variable output. Also new is the 3.5mm headphone jack. The case is still a very solid box of cast aluminum; the irDAC-II is much heavier and sturdier than most budget components.

On the irDAC-II’s rear panel are two coaxial, two optical, and one asynchronous USB input, and an antenna for the Bluetooth receiver. The coaxial inputs support 24-bit PCM with sample rates up to 192kHz; the optical supports up to 24/96. The USB input supports up to 24/384 and DSD128. There is also support for Bluetooth SBC, AAC, aptX, and aptX-LL (Low Latency). Its predecessors used DAC chips from Burr-Brown and Wolfson, but the irDAC-II uses an ESS Technology ES9016K2M chip, which features ESS’s patented 32-bit Hyperstream DAC architecture, a Time Domain Jitter Eliminator with a claimed dynamic range of +122dB, and total harmonic distortion plus noise (THD+N) of -110dB. The irDAC-II itself has a signal/noise ratio of 117dB (24-bit, A-weighted) and THD+N of 0.0007%, according to Arcam. Although the irDAC-II’s ESS DAC has a built-in, high-quality, 32-bit volume control, Arcam uses a separate, digitally controlled, analog volume control: a Texas Instruments PGA2311 -- the same IC they use to control volume in their FMJ A19 integrated amplifier.

The irDAC-II omits the irDAC’s USB Type-A input for direct connection to an iPod or iPad. However, the irDAC-II’s headphone output is said by Arcam to be taken from their flagship integrated amplifier, the A49. In fact, when Doug Schneider and I ran into Arcam founder John Dawson at the 2016 CES, he described the new model’s headphone output as “pretty decent” -- which one of Arcam’s PR people quickly explained was British understatement for “very good.”

The irDAC-II’s variable output allows it to be directly connected to a power amp. To make this easier, Arcam has provided on the rear panel two pairs of RCA outputs, labeled Fixed and Variable. There are also a power switch and a DC input for the wall-wart power supply, which comes with various international plug adapters.

The full-size remote has reasonably large buttons, including those for direct access to each input, and is larger and of better quality than many remotes supplied with components in this price category. It also has the ability to control a PC or Mac source through the USB Human Interface Device (HID) protocol. I was able to play, pause, and stop and skip tracks when using the remote to manage tracks through foobar2000 on my Windows 10-based laptop. 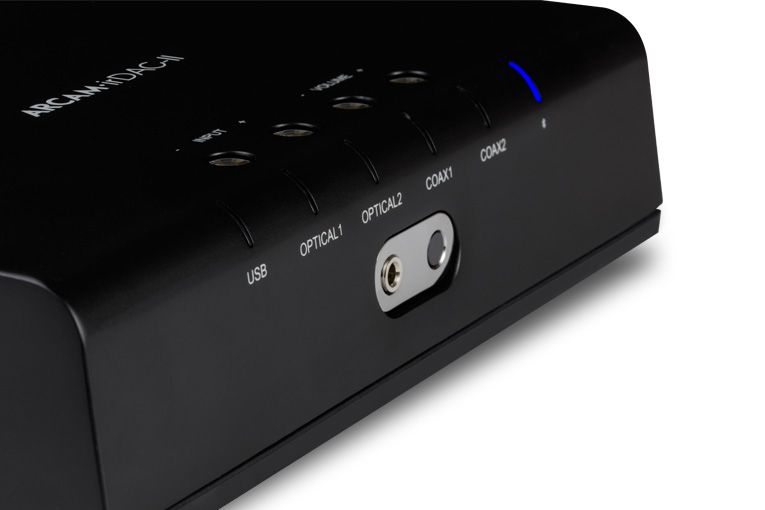 The irDAC-II’s LEDs indicate which input is active by glowing red, then blue when a signal is received. Although it lacks any sort of display to indicate the volume level or sample rate, etc., when the volume is adjusted, the LED for the active input flashes several times, and glows orange when muted.

The Arcam irDAC-II’s variable output meant that I mostly used it directly connected to an NAD Masters Series M27 power amplifier and my Windows 10 laptop running foobar2000, as well as to a NuPrime Audio IDA-8 integrated amplifier-DAC. Speakers consisted of KEF R900s and GoldenEar Triton Three+ Towers; I also used PSB’s M4U 1 headphones. The system was linked with my usual complement of interconnects and speaker cables from Analysis Plus, AudioQuest, and Nordost; and power cords and power conditioning from Blue Circle Audio, ESP, and ZeroSurge.

Directly connected to NAD’s Masters Series M27 power amp, the Arcam irDAC-II provided exceptionally transparent sound without sounding lean or lightweight. In fact, it sounded uncannily smooth, with plenty of body. The melodic singing in the Brentwood Duo’s cover of “Deadpool Rap (Acoustic Version),” from Deadpool Reloaded: More Music from the Motion Picture (16-bit/44.1kHz FLAC, Milan), had a surprisingly natural quality unlike anything I’ve heard from a similarly priced component. The immaculate voices of siblings Isla and Finley Brentwood were reproduced without strain; the strings of the acoustic guitar were similarly effortless, but with a good amount of steel in addition to the woody richness of the guitar’s body. The sound was a little upfront, but not so much as to distract; overall, the irDAC-II’s sound was an amazing balance of resolution and precise imaging, infused with just the right amount of smoothness.

In comparison with the 16/44.1 version, the high-resolution version of Billy Idol’s eponymous album (24/192 FLAC, Capitol/HDtracks) sometimes seems to lack a little bass energy -- but that’s only because it’s tighter and better defined in hi-rez, with little of the boom and overhang of lower-rez recordings. Through the irDAC-II, I could follow the bass-guitar line so easily that I could almost visualize the instrument between the speakers. The drums, too, remained tight, with a wicked kick in tracks such as “White Wedding (Part 1),” which teemed with the energy of Idol’s snarling vocal. The sound was still very dynamic and punchy, even with the more moderate pace and playful quality of “Hot in the City.” 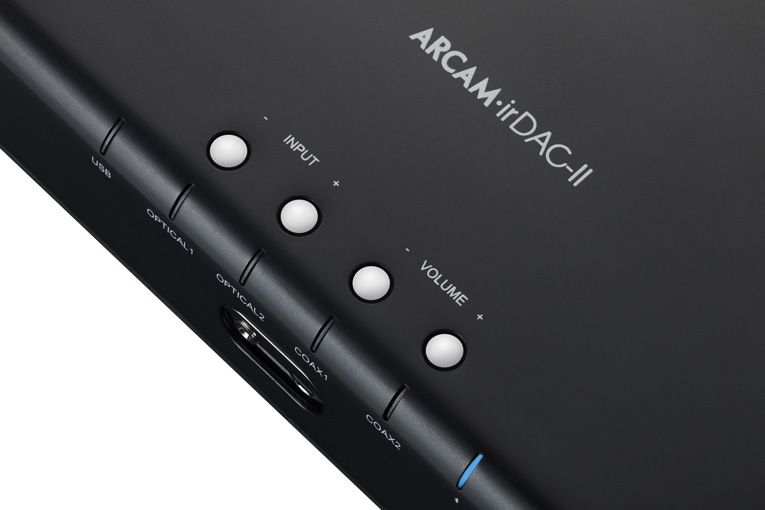 When I connected the irDAC-II’s fixed outputs to the NuPrime Audio IDA-8, the Arcam improved on the already-impressive performance of this DAC-integrated. Even though the NuPrime also uses an ESS Sabre DAC chip, the ES9010K2M, which is similar to the irDAC-II’s ES9016K2M but has slightly lower specs for dynamic range and THD, I preferred the sound of the system with the Arcam DAC -- its analog outputs just sounded a little smoother and more natural. Isla Brentwood’s voice in “Deadpool Rap” was a bit breathier, with more presence. With the IDA-8’s internal DAC, there was more sibilance to the voices of both Brentwoods, and more weight and drive in the pulsating “Maximum Effort (Remix by Nightclub),” also from Deadpool Reloaded. Overall, the differences were relatively subtle, but I consistently found myself preferring the sound of the IDA-8 with the Arcam irDAC-II rather than with the NuPrime’s own DAC.

Although I don’t consider myself a headphone person, I do own, for casual listening, a pair of PSB M4U 1s, which I bought based on recommendations from SoundStage! Network colleagues Brent Butterworth, Doug Schneider, and Hans Wetzel. Listening through the PSBs and the Arcam, I can attest to John Dawson’s claim that the irDAC-II has a “pretty decent” headphone output. I usually listen to headphones through an AudioQuest DragonFly v1.0 USB DAC, but through the irDAC-II, the PSB cans sounded as dynamic and clean as I’d ever heard them. There were good clarity and an incredible amount of drive to the bass with these headphones, but also the same touch of sweetness I’d heard when I’d used the irDAC-II with speakers and a power amp. The PSB headphones can produce a lot of bass, but with the irDAC-II that bass was also well controlled -- as in “Within,” from Daft Punk’s Random Access Memories (24/88.2 FLAC, Édition Studio Masters/Columbia): the piano’s lower registers were solidly and majestically reproduced, with a good sense of realism. I also got a nice sense of space from the crowd noise at the beginning of “Giorgio by Moroder,” and Moroder’s narration sounded especially natural and unforced. 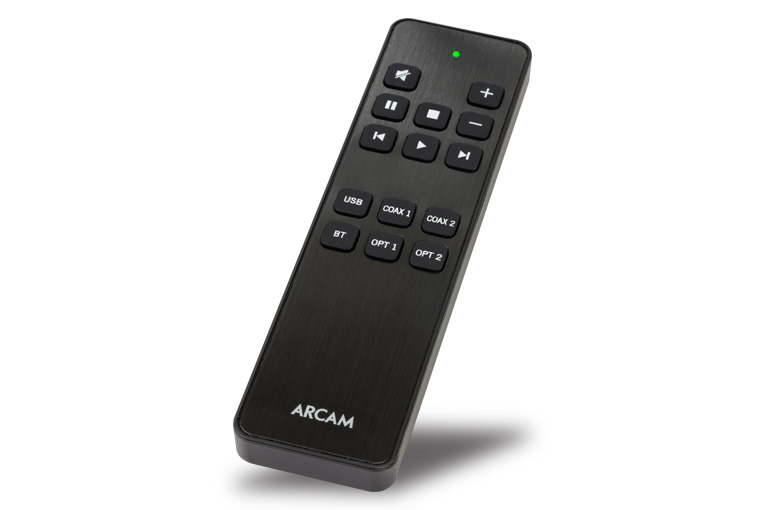 That the irDAC-II’s volume control was relatively coarse was particularly noticeable through headphones. I often found myself wishing that the output level could be adjusted in smaller increments -- sometimes, I just couldn’t find the precise volume I wanted while listening through headphones. This might not be a problem for some, but could be if you’re especially picky about volume levels during critical listening.

Like many new digital components, the irDAC-II includes Bluetooth connectivity, though Bluetooth’s lower-resolution, compressed signal makes this more or less a convenience feature. When I used my iPhone 5 with the Arcam, the sound was a bit soft and indistinct, as it usually is via Bluetooth. Still, the wireless connection can be a useful feature when sound quality is of less importance. 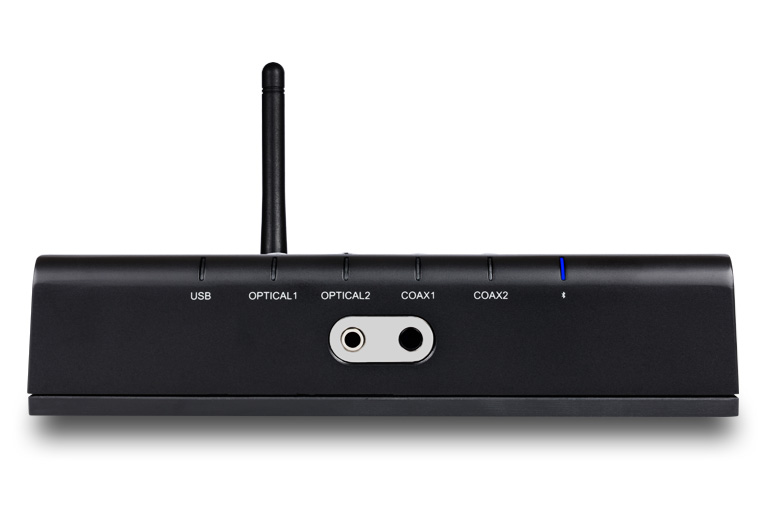 The irDAC-II had excellent retrieval of detail, and the transparent sound that I expect from a good modern DAC, but it also had a refined, natural sound that’s rare in budget digital components. Cyndi Lauper’s voice was authentically raspy in “True Colors,” from her The Body Acoustic (16/44.1 WAV, Sony), but the irDAC-II also imbued it with a smokiness that was very alluring. The double bass, too, sounded woody and rich, but not so deep as to descend into murk, as it might with lesser, more fulsome-sounding DACs. In terms of pure audio performance, the irDAC-II lacked a bit of depth; the Oppo BDP-105 Blu-ray player ($1199, discontinued) outperformed it in that regard, and slightly widened soundstages, but couldn’t match the Arcam’s smooth, graceful quality through the midrange and upper frequencies. When critically assessing a component, I usually listen to only a few very familiar tracks on an album such as The Body Acoustic; but the irDAC-II’s sound was so inviting that, more than once, I couldn’t resist listening to almost the entire album.

Arcam’s irDAC-II is a very sturdy but fairly nondescript-looking little black box. But, as with many Arcam products, packed inside its plain exterior is a great deal of audio goodness. It was able to extract tons of detail from recordings while sounding less “digital” than most other inexpensive DACs, and it provided a level of pure musical enjoyment that I have found extremely rare among budget products. The volume increments of its variable output were too coarse for my liking, particularly with headphones, but this might be less of a problem for others -- and if you use only the Arcam’s fixed output, it won’t be a problem at all. If you’re looking to get true high-end sound from a computer-audio system or from an inexpensive optical-disc player, I don’t know of a better or less costly way of doing this than adding an Arcam irDAC-II. Whether used as a conventional DAC or as a DAC-preamp, Arcam’s irDAC-II consistently provided a level of sound quality that exceeded my expectations for something so inexpensive.