In my former day job, I visited the central offices of various telephone companies. These are usually nondescript buildings in older neighborhoods, and in their heyday each housed mile after mile of thin, copper wires terminating in thousands of rectangular, pincushion-like terminals. The oldest had mechanical telephone switches -- the kind triggered by rotary phone dials.

What every one of those central offices had was a lot of empty floor space. As technology advanced, telephone switches shrank. Today, thanks to fiber optics, equipment that occupies only a small corner of a 10,000-square-foot floor can process vastly greater numbers of calls -- and, more important, Internet traffic -- than could ever be handled by a city full of mechanical switches. Also greatly reduced is the need for high-capacity cooling. The air-conditioning units in the central offices I visited had no trouble keeping up with the far lower volumes of heat produced by modern equipment. 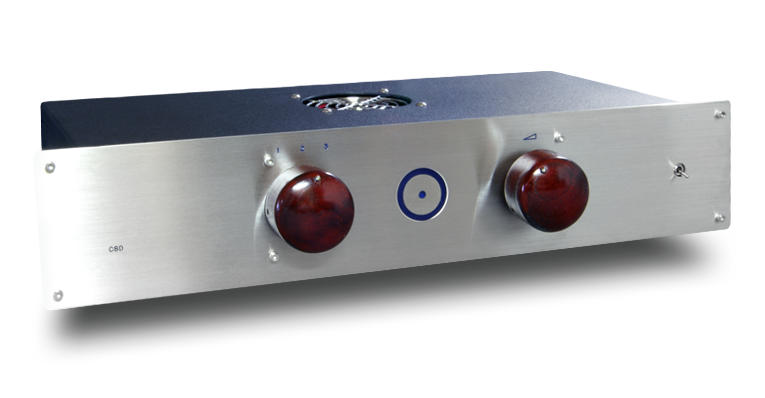 The class-A amplifier is analogous to the as-built central phone office. It requires heavy-duty transistors running flat out all the time -- whether you’ve got your volume control set to 1 or 11, a class-A amp eats power and generates heat with the abandon of an ancient Roman at a vomitorium. Class-A amps are usually large and heavy, thanks to the big power supplies they need to generate all that power, and the large heatsinks needed to cool those supplies.

Over the past decade, class-D has become a major force in audio amplification for a number of reasons. Chief among them is that, thanks to their low power requirements and low generation of heat, class-D amps can be small and placed inside all sorts of modern gadgets, from iPod docks to powered loudspeakers. Small size and cool running also make possible significant cost savings: amp cases can be smaller, heatsinks dispensed with, and power supplies and transformers reduced in size and complexity.

The class-D amplifier is also akin to the PC: Although there’s a general architecture that anyone can design a computer to meet, the reality is that a relatively small number of companies design and make computer innards and sell them to other companies, which in turn make them into the devices we place on our desks and laps. Look under the hood of a class-D amp, and chances are you’ll find designs from one of the Big Three: Tripath, ICEpower, or Hypex. My current favorite purveyor of class-D amplification, NAD, makes no bones about its partnership with Hypex of the Netherlands. ICEpower modules can be found in products from companies as diverse as Pioneer and ICEpower’s parent company, Bang & Olufsen. Tripath often occupies the lower price points and is a force in the amp-on-a-chip market.

Blue Circle Audio’s new CSD integrated amplifier ($2495 USD) is a proprietary, all-class-D design that succeeds the company’s CS amplifier, which it very much looks like. I know this because I’ve owned a BCA CS longer than I have any other amp in my collection -- it joined the family in 2006. But while the CS and CSD look a lot alike, they’re very different animals under the skin.

The CSD measures 19”W x 3.75”H x 9”D and weighs only 9.5 pounds. It offers a healthy 145Wpc into 8 ohms, or a muscular 290Wpc into 4 ohms. Like all of Blue Circle’s full-size amps, the CSD comes stock with a stainless-steel faceplate, and wooden knobs for source selection and volume control. A wealth of options, from stainless-steel knobs to front panels of various exotic woods, are available at extra cost. So, too, is something you’d expect to receive with any modern integrated: a remote control. Blue Circle sells a surprising number of preamps and integrated amps without remotes -- perhaps the couch-potato phenomenon hasn’t yet infected all of humanity. The CSD comes with a respectable three-year warranty.

One thing that seems out of place on a class-D amp is the circular grille in the CSD’s top panel. Here one can mount a cooling fan, but it’s not necessary if you live in a temperate climate. Blue Circle explains that it sells a lot of products for use in such hot climes as Hong Kong and Singapore, where amps are often stuffed into cabinets with little or no ventilation.

On the rear panel are three single-ended (RCA) inputs, speaker binding posts that are not encased in Euro-friendly plastic (thank you), and an IEC power inlet. There’s space set aside for optional preamplifier and subwoofer outputs. Inside is point-to-point wiring, unusual in a class-D amp, as well as globs of silicone, a trademark of Blue Circle’s founder and designer, Gilbert Yeung. This substance is used to isolate from vibrations the main circuit board, and the large capacitors and transformers. As for the origin of Blue Circle’s class-D design, that will remain in the company’s archive of guarded secrets.

In the past I’ve written favorably about class-D sound, even nominating NAD’s C 390DD Direct Digital integrated amplifier for a Product of the Year award. While some maintain that class-D lacks the humanity of pure class-A, I’ve never agreed. I’m no fan of the harshness, artificiality, or sterility that some claim to be inherent in class-D. I haven’t heard any well-designed class-D amps that suffer from those ills. Nor did the CSD.

To prepare for the CSD’s arrival, I moved the CS from my secondary system into my all-new main rig. What I heard was classic Blue Circle: detail, spaciousness, silence, a slightly recessed high end, and a liquid, involving midrange. I was also reminded that the one area in which the CS left me wanting more was low-end grunt. Reduced bass production isn’t something generally associated with class-D, so I was eager to hear how the new kid would fare in this regard.

The CSD review sample that came to me was a veteran of audio shows and dealer demos -- I could safely assume it was already well broken in. I gave it 24 hours to get nicely warmed up, then sat down to listen.

I opened with the concluding Allegro of Handel’s Concerto Grosso Op.6 No.12 in B Minor, with Pavlo Beznosiuk directing the Avison Ensemble (24-bit/88.2kHz FLAC, Linn). The sound was immediately inviting. This isn’t always the case with this recording -- just as a jewel sparkles more brightly under the right light, sometimes a reviewer must find the right tracks to set off an audio component. But I liked pretty much everything I heard through the CSD. First impression: This is a lot of sound for under 2500 bones.

Next up was “You Can Call Me Al,” from the 25th-anniversary reissue of Paul Simon’s Graceland (24/96 FLAC, Columbia/Legacy). I’m not crazy about the remix, but I did like that the CSD was producing much better bass from the 8” woofers of my Paradigm Reference Prestige 95Fs than the CS could ever manage. Bass drum and tom rolls had satisfying thump without sounding overblown or boomy.

“Don’t Know Why,” from Norah Jones’s Come Away with Me (16/44.1 FLAC, Blue Note), is a reviewer’s standby because it’s a great, detailed recording. In the wrong hands, the squeaks and squeals of finger slides on guitar strings can sound etched and irritating. But through better gear such as the CSD, such things add detail and life to the listening experience. Hi-hat and drumstrokes on snare sounded as if initiated by multi-bristled brushes, not a white-noise generator. Jones’s voice sounded a bit less forward than I’m used to hearing it through my system, possibly indicating a slight de-emphasis of the upper midrange. At the higher end, I heard fewer sibilants than I recalled, and the shimmer of cymbals didn’t last as long. 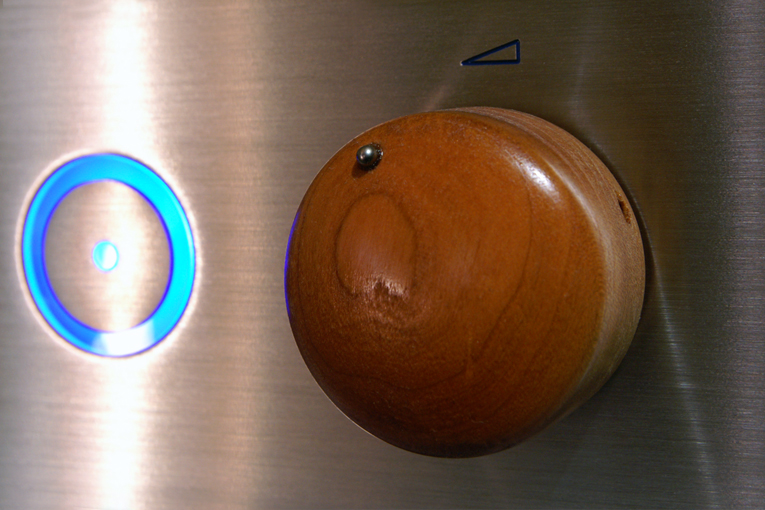 One of my favorite test tracks is William Walton’s Coronation March: Crown Imperial, the title composition of the 2007 compilation of music for organ, winds, brass, and percussion by organist Mary Preston, with Jerry Junkin leading the Dallas Wind Symphony (24/96 FLAC, Reference). This recording has it all. If an amp can render deep bass, the timpani and bass drums that punctuate this track throughout will shake the listening room. If not, they’ll fizzle out most disappointingly. The CSD again showed that it had chops in this department, clearly improving on the CS. Still, I’ve heard other amplifiers sound stronger in the bass, making this track even punchier. The CSD moved the drums farther back on the soundstage. The frequent cymbal crashes in this work had excellent persistence, detail, and decay via the CSD. Even a triangle managed to stand out clearly amid the recording’s massed woodwinds and brass. The brass section offered bite but didn’t overpower the woodwinds, which shone through clearly. Spaciousness was good, and imaging was solid, in keeping with the CSD’s price point.

What I found most remarkable about these two generations of Blue Circle amplifier, which differ greatly in architecture and execution, was how similar they sounded. It was almost as if the two were identical twins, but the CSD got into fitness and bulked up, while his wombmate took up more intellectual pursuits. In other words, if you added to the CS’s sound a third more bass output and triple the power, you’d get the CSD. The CSD is a significant improvement on the CS’s only two but related shortcomings: its low power output and underwhelming bass.

Considering that Gilbert Yeung is anything but formulaic in his approach to component design, I’m amazed that he could produce two amplifiers, a decade apart, that are so different in execution and parts but so similar in sound. Its utilitarian looks and Spartan feature set mean that the CSD won’t be the integrated amplifier for everyone. But where it matters -- the sound -- it’s impressive. Blue Circle Audio’s CSD is certainly worthy of your consideration.