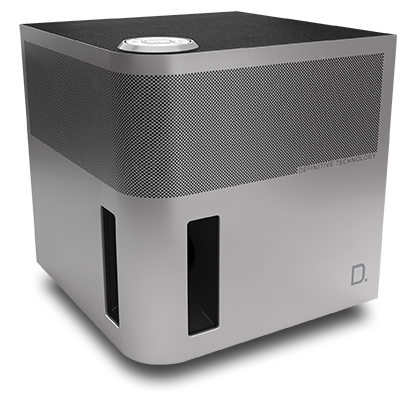 When it comes to new technology, I’m not much of a trailblazer. I use new technologies when they’re useful to me, but not merely for technology’s sake. I have a smartphone for work, primarily to answer e-mails when I’m away from my desk, or to send text messages and, occasionally, surf the Internet. But other than that, I have little time or patience for apps, whether they’re actually useful, merely for amusement, or whatever else it is that smartphone apps can do. I have had great luck with Definitive Technology’s Sound Cylinder Bluetooth speaker, designed for use with tablet devices, however. Portable sound need not disappoint. The Sound Cylinder’s innovative industrial design and performance certainly impressed me.

Recently, fellow SoundStage! Network writer Brent Butterworth wrote a feature article, “Why You Shouldn’t Ridicule the Bluetooth Speaker.” In it, he extolled the virtues of a simple-to-use, self-contained speaker system that would appeal to the vast majority of consumers. At $249 USD, Definitive Technology’s Cube is about middle of the road price-wise for a Bluetooth speaker. But considering DefTech’s track record for producing high-performance speakers -- including the fantastic Mythos ST-L SuperTower, which I recently reviewed -- I was more than a little curious to hear their larger, more ambitious Cube.

The last few speakers I’ve reviewed have been relatively large floorstanders -- something as small as the Cube was a refreshing change. Measuring only 7.75”H x 7.5”W x 7.5”D, it has a notch in the back so that it can be easily picked up with one hand. At ten pounds, the Cube is still quite substantial for a portable speaker, and appears to be well made, with a solid feel and attractively minimalist styling accents that include aluminum, as in the Sound Cylinder.

The Cube’s unique driver arrangement basically consists of six drive-units firing in what DefTech calls a Tri-polar dispersion pattern. The radiused front corner has two 1.25” midrange/high-frequency drivers, with an additional 1.25” driver on the far left side and a 1.25” driver on the far right side. On the top of the Cube are a summed-mono, upward-firing 1.25” driver and a 5.25” woofer said to be derived from the one used in DefTech’s BP8080-ST bipolar floorstander ($2998/pair), ported on the radiused front corner below the mid/high drivers. The Cube’s 1.25” drivers are an optimized version of the one found in the Sound Cylinder. Three 15W amplifiers power the 1.25” drivers, and a 35W amp drives the woofer. The Cube’s rechargeable lithium-ion battery is claimed to provide up to eight hours of operation on a single charge.

The connections are fairly standard for a Bluetooth speaker: a single 3.5mm minijack for analog connections, a USB Type A port strictly for charging devices, and an inlet for the detachable power cord. Presumably, the Cube will be used by most buyers to stream music via Bluetooth; it supports the higher-quality aptX and AAC codecs.

DefTech says that the Cube’s compact design allows it to be placed in corners and take up very little shelf space. I found that it worked well in corners or against walls, as well as out in the open on a kitchen or coffee table, or the floor. It supports Near Field Communication (NFC), which allows similarly enabled devices to be paired merely by gently touching them to the Cube. Although none of the devices that I used with the Cube were equipped with NFC, I had no trouble getting it to pair with an iPhone 5, an Asus tablet, and a second-generation iPod Touch, the last used as my primary source.

I immensely enjoyed using the Cube. I’d tried a few iPod docks before, but had found them inconvenient because the iPod had to be physically connected to the dock. With a Bluetooth speaker like the Cube, I could sit on the couch or at my desk in another part of the room and still control the music. I’m starting to understand what Brent meant by the convenience of Bluetooth speakers.

The buttons and lights on the top of the Cube control and indicate the status of power, volume, and Bluetooth connectivity, and require little in the way of instructions. With no more than a quick glance at the user manual -- to learn how to put the Cube into Bluetooth pairing mode -- I had the system up and running in just a few minutes, after charging it up for the first time. The files on my iPod were mainly 320kbps MP3s, which I compared with 16-bit/44.1kHz WAV versions of the original files. Although there was a slight difference in sound quality between the two file types, it wasn’t noticeable in casual listening, so for the most part I used MP3s. I left the Cube plugged in most of the time, but occasionally ran it using its internal battery.

My enjoyment of the Cube wasn’t simply because of the convenience of its wireless operation -- it also sounded very good. Granted, there was no real stereo imaging, but the mids and highs were quite smooth, the bass was surprisingly tuneful and ample, and it could play quite loud. With the Cube, I could listen to any of my favorite tunes at a high enough volume that I could really get into the music and enjoy myself, even while performing other tasks. Although my kitchen adjoins the family room, the system in that room, which consists of a NuForce DDA-100 integrated amplifier and Definitive Technology StudioMonitor 45 speakers, is far enough away that I can’t easily use it for background listening when preparing meals. With the Cube situated closer to me in the kitchen, such as on the center island or a countertop, listening to music became a much more engaging experience -- DefTech’s Tri-polar dispersion pattern did an excellent job of providing a big sound from this little box.

As I listened to “Sharp Dressed Man,” from ZZ Top’s Eliminator (320kbps MP3, Warner Bros.) -- a guilty pleasure from the 1980s that I can’t seem to stop listening to lately -- the Cube pumped out some respectable kick drum and crisp guitar riffs that were easily discernible from the percussion and bass guitar. While there wasn’t much stereo separation, the sound was big and not at all homogenous, as you might expect from such a relatively small powered speaker. Lana Del Rey’s latest album, Ultraviolence (320kbps MP3, Interscope), is full of closely miked vocals that the Cube did a good job of reproducing. The image outlines weren’t particularly sharp, but Del Rey’s voice floated in front of and above the Cube with a quite large image and a smooth, natural sound. The guitar in “Pretty When You Cry” was convincing in its clarity, with the sense of being situated in a large, open space with a reverberant sound -- as was the piano in “Old Money.” 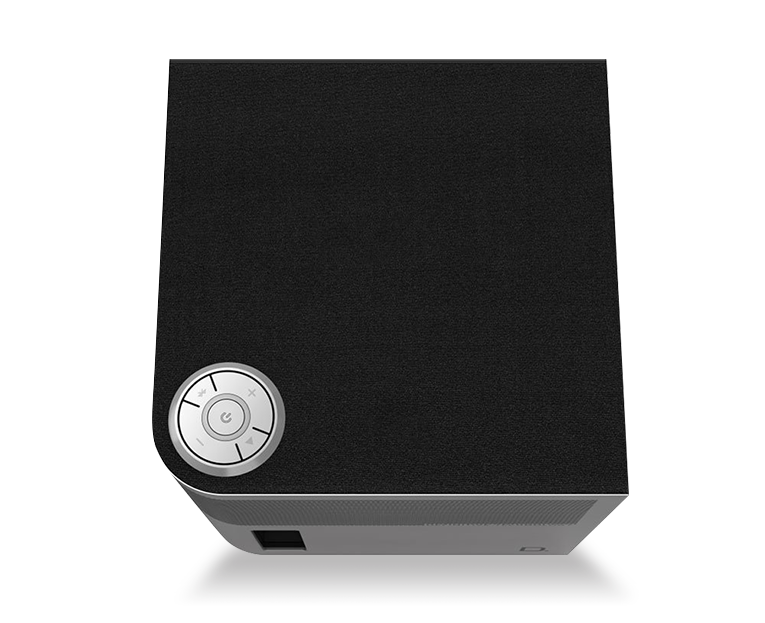 Whether playing the electronica of Daft Punk’s Random Access Memories (320kbps MP3, Columbia), or Anne Akiko Meyers and the English Chamber Orchestra’s recording of Vivaldi’s The Four Seasons (320kbps MP3, eOne), the Cube always had a smooth, realistic sound. It even had the volume and bass to do a credible job of filling my midsize listening room with enough sound to provide a very involving experience. And one of the great things about the Cube was that I could simply unplug it, take it into any room in the house, and still have that same expansive sound.

The Cube did not sound like a high-end audio system -- my NuForce DDA-100 Direct Digital integrated amplifier ($549) and DefTech StudioMonitor 45 bookshelf speakers ($398/pair) could still play louder, with greater detail and superior fidelity. But unlike the Cube, my stereo separates didn’t sound so good when I wasn’t seated at or near the ideal listening position. As with most stereo systems, as soon as I got more than a few degrees off axis, the stereo imaging collapsed and I became acutely aware that the sound was coming from two separate speakers. But I could place the Cube just about anywhere in the room and it would produce a believable image, albeit mostly mono, as long as I remained somewhere in its front hemisphere. Ferruccio Spinetti’s double bass, in duo Musica Nuda’s well-recorded eponymous album (320kbps MP3, BHM), was full and rich but well articulated. Singer Petra Magoni sounded sultry and breathy, her small vocal inflections in “Eleanor Rigby” audible no matter where I stood in the room. And when I listened to higher-resolution WAV files vs. MP3 versions of the same tracks, the Cube had enough fidelity to reveal some of the differences between them. In “Royals,” from Lorde’s Pure Heroine (16/44.1 WAV, Lava Music/Republic), the bass was a little tighter and better defined in the WAV file. The exquisitely recorded “Gortoz a Ran -- J’Attends,” from Hans Zimmer’s score for the film Black Hawk Down (16/44.1 FLAC, Universal), is an excellent test for midrange clarity; the Cube was able to make voices in the higher-resolution, lossless WAV file sound a tad smoother and richer.

DefTech’s own Sound Cylinder ($199) had a similar smoothness and fidelity through the midrange with voices such as those in “Gortoz a Ran -- J’Attends,” but it couldn’t match the Cube in terms of output level or image size. Most noticeably, its reproduction of Spinetti’s bass in “Roxanne” didn’t go low enough or loud enough to sound realistic. Magoni’s voice did sound sweet and natural, but the Cylinder lacked the volume to be truly engaging when placed in the middle of my listening room. The Sound Cylinder works great as a highly portable speaker when attached to a tablet or when used for background listening. However, the Cube could fill a room with punchy bass and good fidelity -- using it was more like listening to a high-quality bookshelf speaker, but with a bigger, more multidirectional sound due to its Tri-polar radiation pattern.

Definitive Technology’s Cube Bluetooth speaker remained a lot of fun to listen to, even after many weeks of use. Not only did it provide good fidelity with plenty of volume, its unique Tri-polar driver array made sure it did so even from less-than-ideal positions. I’ve heard other high-quality Bluetooth speakers, such as Polk Audio’s Woodbourne ($699) and Bowers & Wilkins’ AirPlay-enabled Zeppelin ($599), but each is bigger and costs more than the Cube, and is not truly portable.  I heartily recommend the Cube for its ability to provide high-quality sound in a variety of settings, and for the convenience of its small size.