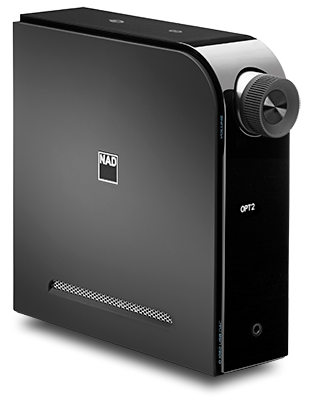 After 30 years of the Compact Disc and just a bit less of pervasive computer-based audio, an entire generation or two have grown up listening mostly to digital two-channel music. Still, many two-channel integrated amplifiers and receivers lack digital inputs, and the many audio/video receivers that accommodate S/PDIF connections do so in an uninspiring manner for music. It’s no surprise, then, that the USB DAC has become one of the most popular categories of home audio equipment.

NAD, which predates the digital era, has provided an optional built-in USB DAC for some of its integrated amps, such as the C 375DAC, which I reviewed last year. NAD also offers several models of USB-DAC-equipped components at a range of prices. The D 1050, D 3020, and D 7050 are members of NAD’s Digital Classic series. The D 3020 and D 7050 are integrated amplifiers, not standalone DACs, but all three share a similar appearance: a vertically oriented case that’s finished in matte black that’s smooth to the touch, beveled a bit at the top front, measures 8.1”H x 2.3”W x 7.3”D, and, in the case of the D 1050 ($499 USD), weighs 2.2 pounds (1kg). The D 1050 has one asynchronous USB, two optical, and two coaxial digital inputs, fully balanced (XLR) and unbalanced (RCA) analog outputs, and a headphone output. The D 3020 ($499) adds aptX Bluetooth streaming, 30Wpc of amplification, a subwoofer output, and an infrared remote, while dropping the analog output and half the S/PDIF ports. The D 7050 ($999) restores the extra S/PDIFs and unbalanced analog outputs, adds DLNA, Apple Airplay, Ethernet, and Wi-Fi network connectivity, and boosts the amplification to 50Wpc. The D 1050 supports resolutions up to 24-bit/192kHz from USB; the other models top out at 24/96.

The D 1050 came packed in two layers of cloth bags, one white, one black. Also in the box were eight attachable rubber feet and four adapter plugs, the latter so that the DAC can be plugged into various countries’ wall sockets. A foldout, poster-size sheet illustrates setup, including fitting the included power supply with an adapter plug. A slightly more detailed manual can be downloaded from NAD’s website.

On the front panel are a 3.5mm headphone jack, a volume knob, and indicators for the source selected and the sample rate. On the top panel, flush with its smooth surface, are the power and source-selection buttons. The source selection is denoted by an illuminated S. Touching the S cycles through all source options, no matter how many are actually connected -- there’s no way to directly select a source out of sequence. When awakened from standby mode, the D 1050 defaults to the last source selected. 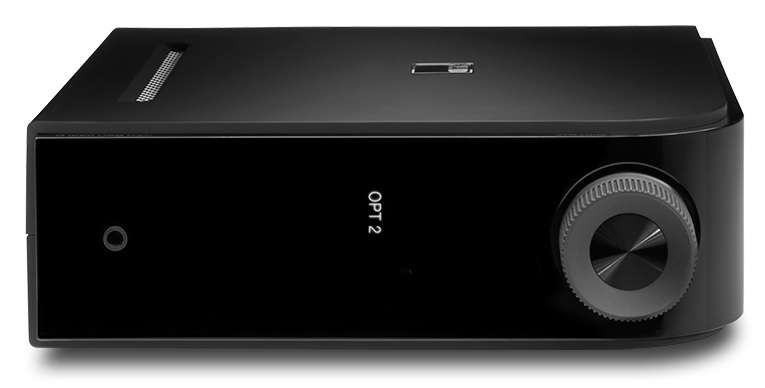 Connected to its power supply, the D 1050 draws about 7W when active, and less than 0.5W in standby (though my Kill a Watt registered no use of power in standby). To reduce power consumption, the D 1050 automatically switches itself off after about 30 minutes of not receiving a signal, but doesn’t turn itself back on when sent a digital signal. To turn it on, you need to press a button on the top panel; this can be hard to find by touch on the smooth surface, and I found that the touch point was not quite aligned with the illuminated marking. While this won’t be a problem when the D 1050 is used on a desktop, it could be annoying if it’s placed in a rack. Better would be a low-power mode that switched to full power when it detected a signal, or at least a remote control. (According to NAD, since the D 1050 has an IR remote sensor, its automatic standby mode can be defeated by the dealer using one of NAD's IR remote controls.)

Apple’s OS 10.6 (Snow Leopard) and above include a driver that supports asynchronous USB and up to 24/192 resolution, and the D 1050 was recognized by and worked with the driver included in Ubuntu. For Windows computers, however, a driver must be downloaded from NAD’s website; I downloaded v.1.63.0. The uneventful installation completed, Windows showed “NAD USB Audio” as a speaker choice for playback device, with any sample rate up to 24/192 available to be set as the default rate. Foobar2000 showed “NAD USB Audio” as supported via ASIO, kernel streaming, WASAPI event and push, and Direct Sound. I went with WASAPI event, and enabled Exclusive Mode in the Audio Playback Devices control panel. I found NAD’s driver to be perfectly stable during my listening sessions. The volume knob on the D 1050’s front controls the headphone output level -- but, unlike some USB DACs, without altering the system, service (WASAPIHost64), or application volume level in Windows. As the volume knob had no impact on the level of the single-ended line output, it will be less than ideal for desktop systems that include powered speakers. Plugging in a pair of headphones mutes the line outputs.

When changing and locking to a sample rate, the D 1050 makes a sharp click, and displays the new sample rate on the front panel. Greg Stidsen, NAD’s director of technology and product planning explained: “NAD uses a reed relay to keep the output impedance extremely low, a very desirable feature and one that costs significantly more to implement than the simple CMOS switches commonly used. The soft clicking sound from the reed relay comes from the D 1050 itself and is not heard on the signal output, which is always silent if there is no signal present.” I noticed that, when sent the less common sample rates of 88.2 or 176.4kHz, the D 1050 displayed them as, respectively, 96 and 192kHz. Stidsen explained: “The D 1050 does not do any upsampling or downsampling; all bitstreams are maintained in a bit-perfect state. Not including the 88.2/176.4 indication is because of a space limitation on the display. In fact, there are even separate clocks for the 44.1/88.2/176.4 sample rates and the 48/96/192 sample rates, to provide the lowest possible jitter by avoiding frequency transpositions.” A dump of the USB device information (cat /proc/asound/card*/stream0 > log.txt) while playing music supported this explanation.

The D 1050’s sound was dramatically better than those of the DACs built into my Onkyo TX-SR500 A/V receiver and Music Hall MMF-CD25 CD player. Overall, the sound was less bright, with greater separation across a wider soundstage. In the recording of Mahler’s Symphony No.8 with Riccardo Chailly conducting the Royal Concertgebouw Orchestra, Prague Philharmonic Choir, and Netherlands Radio Choir (CD, Decca 289 467 314-2), the sound was bigger and less constrained. I was able to pick out more individual instruments and choral voices. The tonalities of the massed voices and brass were rounder, more natural. More low range was delivered, particularly from the low strings and timpani. All of this added up to a performance communicated with greater drama and musicality. The D 1050 excelled in the midrange, with a lower-mid emphasis that provided a full, rich, robust sound with plenty of drive. The upper range was slightly laid-back -- a taming of the brightness that’s a problem in the older built-in DACs I compared the NAD with.

The D 1050 was able to wring additional content from high-resolution digital files. Elton John’s Madman Across the Water (24/96 FLAC, Island/HDtracks) was delivered with a driving beat from the electric bass guitar, coupled with drum strokes and a tight ensemble that filled the width of the soundstage. While the hi-hat cymbals were harmonically truncated, the voices punched through with resolute decays and determined panning. The album sounded warm, with nary a hint of brightness, even in Paul Buckmaster’s string arrangements -- and the D 1050 did particularly well with John’s vocal range.

I compared the D 1050 to the built-in DAC (a Cirrus Logic CS43122 chip) of a Cambridge Audio 651R receiver ($2299) in for review. The Cambridge was brighter, with a bit of a plastic sheen over the notes. The NAD was truer to the tonality of the piano in Hélène Grimaud’s disc of piano sonatas by Rachmaninoff and Chopin (CD, Deutsche Grammophon B0004048-02), with cleaner decays and greater dynamic range. The imaging was similar, though the NAD had a bit more stereo separation and a wider soundstage. In the Scherzo of Chopin’s Sonata No.2, the NAD brought out a more delicate touch produced by the spaces between the notes; this was less distinct through the Cambridge. The 651R provided more bass rumbling but the D 1050 rendered orchestral voices more distinctly, was crisper, and delivered greater dynamic range in Mahler’s arrangements of Schumann’s Symphonies 2 and 4, performed by the Gewandhaus Orchestra conducted by Riccardo Chailly (CD, Decca 475 835-2). 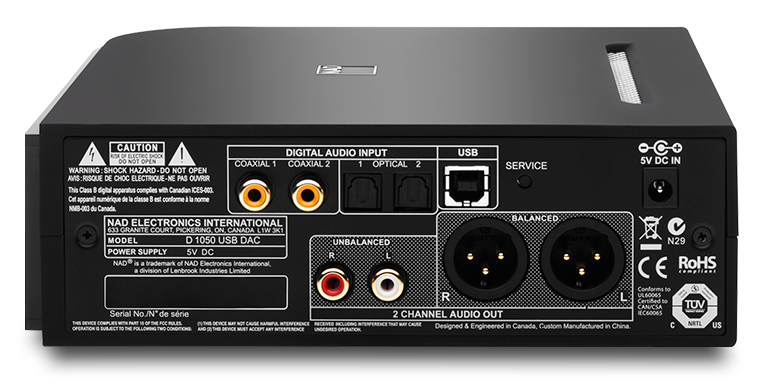 In my desktop system, I use a pro-audio DAC-headphone amplifier, the E-MU Systems 0404 USB ($200, discontinued), and a pair of M-Audio Studiophile DX4 powered speakers. Swapped into this computer-based system, if I left the NAD on when not listening to music but, for example, while browsing the Web with Google Chrome on pages with no audio, video, or Flash files, the NAD had an annoying habit of occasionally emitting the click it makes when switching sources or sample rates even though system sounds were disabled. The E-MU’s headphone amp is much more powerful than the NAD’s, but its DAC lacked some of the D 1050’s midrange heft and smoothness. On the other hand, the 0404 USB elucidated greater detail across the soundstage and audioband, and more naturally rendered the tonality of Hélène Grimaud’s piano in Liszt’s Sonata in B Minor (24/96 FLAC, Deutsche Grammophon/HDtracks). Some notes were simply lacking in the resonance of a concert grand, particularly in the upper registers. This was strange, because the D 1050 handled so well the tones of other instruments and ensembles. The NAD performed best in the midrange and low mids, providing a nice richness of tone without too much warmth, and was a nice combination with the small M-Audio nearfield speakers. On balance, the D 1050’s attenuation of brightness and its more forgiving reproduction of less-than-stellar digital recordings made the latter more pleasing to listen to.

When shopping for audio products, it’s best to carefully consider your needs. For $499, NAD has packed many options and capabilities into the D 1050. However, listeners who need only a single coaxial S/PDIF and USB input, and especially those with large collections of recordings at CD resolution (16/44.1), might find better sound in the Resonessence Concero ($599), and for not much more money. However, you’d then lose the flexibility of the other three inputs (including TosLink/optical), and the headphone output with volume control. On the other hand, the D 1050 was a substantial improvement over my older and current-generation AVRs, especially in terms of tonality, imaging, and crispness, with an overall pleasing sound. I was also pleased with how trouble-free its custom driver was with Windows 7 and 8 -- something that my E-MU 0404 USB has taught me can’t be taken for granted. Even the driver for NAD’s C 375DAC produced occasional audible hiccups that the D 1050’s driver did not. Overall, the NAD D 1050 is a remarkable value that harks back to NAD’s traditional combination of performance, value, and simplicity.