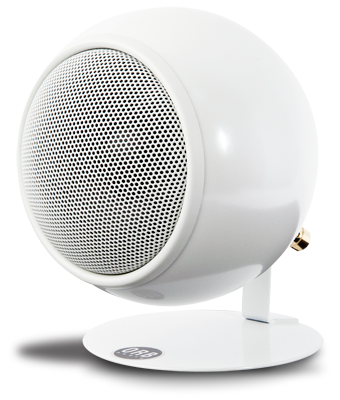 Most speaker manufacturers market a full line of speakers, or even several lines, each line serving a different market niche. Though the models within a line usually vary in size, they often share the same design principles and some of the same parts. Orb Audio makes precisely one model: the Mod1 ($239 USD per pair), a nearly spherical speaker that, at 4 3/16"W x 4 3/16"H x 4 7/8"D, is a little bigger than a softball.

Orb offers many different configurations of single and multiple Mod1s. The Mod2 is simply a stack of two Mod1s, joined by a short desktop or floor stand; from there, it or any Orb system can be upgraded to take one of many different configurations. You can start with a pair of Mod1s, then add to them as your budget allows. But the next thing you’ll probably want to add will be a subwoofer, as the Mod1, with its single 3" driver, is understandably shy on bass. The largest configuration I’ve seen is the Mod4, which is four Mod1s in a row. The speakers come in standard finishes of Metallic Gloss Black or Pearl White; for another $60 per pair, they can be finished in Hand Polished Steel, Antiqued Bronze, or Antiqued Copper.

You can build your own system, but Orb also offers complete systems that will save you some money: everything from two-speaker systems up to full 7.1-channel surround-sound systems that include an A/V receiver. I was interested in getting good sound from my computer, so I opted for the Classic One ($549) two-channel system: two Mod1s on desk stands ($239 if bought separately), and a Super Eight powered subwoofer ($399 if bought separately); I added a Booster Mini integrated amplifier ($198 regular price if bought separately, or $164 at special introductory price).

Remember the good old days when there were many more audio showrooms, and you could take speakers home to audition them in your room? Orb makes this possible with a "No hassle home trial" of 30 days, during which you can return the speaker system for "any reason or no reason at all." Orb products are sold only via their website.

What’s in the box and stats

The Orb Classic One system was shipped to me in two boxes. One contained the two Mod1 speakers and the Booster Mini amp, the other the Super Eight subwoofer. Each Mod1 is a polished near-sphere with a section cut out and covered by a black, fine-mesh grille. On the rear are two spring-loaded, gold-plated brass binding posts for the speaker cables, and a knurled nut that secures the Mod1 to its stand. There’s no way to adjust the speaker’s tilt or direction, but the stand can be bent a bit if needed. But listen before you do -- the Mod1 has fairly wide dispersion, and I found I didn’t have to adjust the stand in any way. On its stand, the Mod1 measures 5 1/4"H x 4 13/16"W x 4 7/8"D, which means they’ll fit in almost anywhere. Also available are wall and ceiling mounts ($12.50 to $39 each), and the TOSS ($218/pair) and HOSS ($318/pair) floor stands -- but the supplied desk stands worked just fine for computer use.

Orb describes the Mod1 as a "magnetically shielded full-range satellite speaker." The Mod1 has a crossover-free design, for what the company states is "coherent, lifelike sound." Its single 3" driver is a high-excursion polypropylene cone with a Santoprene surround. The Mod1’s claimed frequency response is 80Hz-20kHz, its nominal impedance 8 ohms, and its power handling 115W. 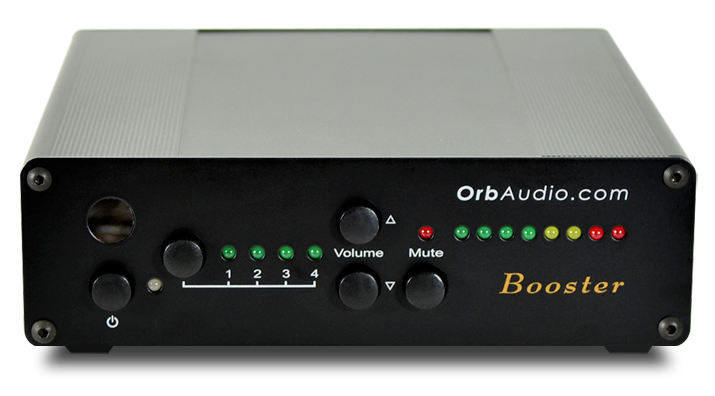 The Booster Mini measures 6"W x 1.75"H by 6.5"D, and comes with a separate power supply and cord, a screwdriver, a wiring harness, a remote control, and four rubber feet. It’s attractively simple and neat, with a black finish. On the front panel are pushbuttons for Power, for selecting one of four inputs, Volume up/down, and Mute. LEDs indicate the status of Power and Mute on/off, which input is selected, and volume level. The volume display is a row of eight LEDs: the first four are green, the next two orange, and the last two red. The Input and Volume LEDs go dark after they’ve been adjusted. Only the Mute and Power LEDs stay on: green/red for Power on/off, and the Mute LED glows red when Mute is engaged.

The Booster Mini’s rear panel has two RCA and two mini headphone stereo output jacks, an RCA subwoofer output jack, a crossover switch for selecting Large or Small speakers, a green harness connector for a pair of speakers, and a DC input into which is plugged the separate power supply. Orb claims that the Booster Mini outputs 20Wpc. 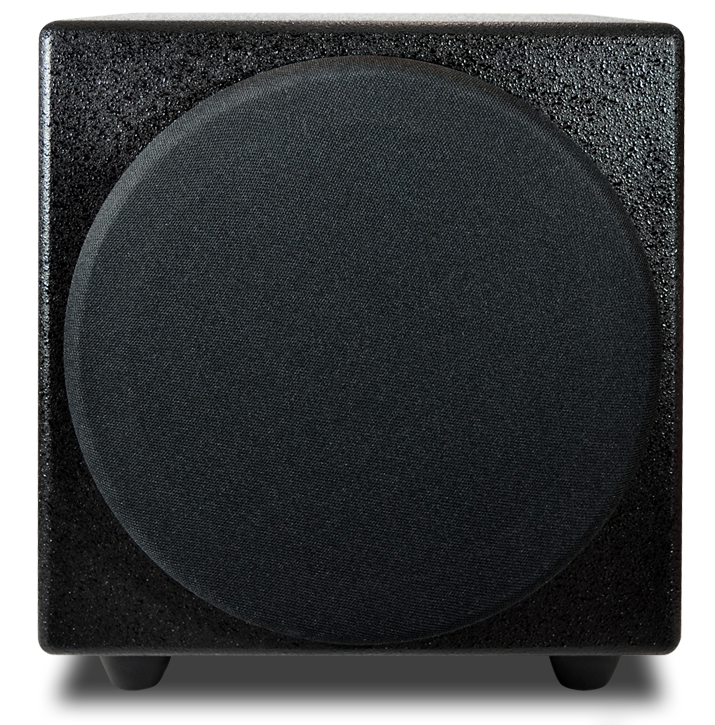 The Super Eight, which was designed specifically to work with the Mod1, is a ported, bass-reflex design with a front-firing 8" cone in a nearly cubical cabinet measuring 12"H x 11.5"W x 11.75"D. The port is a "precision-tuned snorkel type," and the amplifier is a "high-power BASH digital hybrid with digital-switching power supply, enhanced for peak power output." The amp outputs 200W, or 450W peak. The 8" driver is a super-long-throw design with a 30-ounce ferrite magnet. The frequency response is a claimed 28-180Hz, and the crossover is adjustable from 40 to 160Hz. On the rear of the cabinet are: a power switch that can be set to Off, On, or Auto; volume, phase, and crossover controls; an enable/disable crossover switch; and terminals for connection to a receiver or preamp that lacks an RCA subwoofer output.

Setup was simple. My big HP w2338 HD computer monitor sits on a shelf above the keyboard. I placed the Mod1s 22" apart, directly below the display, which the Orbs perfectly complemented. The speakers and my head formed a 22" equilateral triangle. I placed the Super Eight subwoofer on the floor under the computer stand, and far enough back that I wouldn’t accidentally kick it. I set the Booster Mini atop my computer’s CPU, to the left of the computer stand. I then plugged the computer into the third input of the Booster using a cord I had on hand with mini plugs on each end (Other than the Booster’s power cord, Orb includes no cords.) I received my speaker harness already installed at the end of some formidable-looking speaker wire so I just plugged it in to the amp. The harness isn’t usually shipped to consumers like this, but with the aid of Orb’s easy-to-understand instructions and included screwdriver, you should be able to do it in about five minutes. I then connected the speaker wire to each Mod1. The connectors were a bit hard to push in -- the springs are strong -- but better that than a loose connection. I set the speaker size on the Booster Mini to Small, then plugged in the Super Eight using a hefty cable with an RCA jack at each end.

I confirmed that everything was working, then began to tweak. I ended up setting my computer’s volume control to 85%, which meant that setting the Booster’s volume control to the first detent caused the Mini’s red LEDs to come on. Setting the Super Eight’s volume level was a bit of a problem -- the volume control is on the sub’s rear panel, and I was listening from the front. I turned the sub sideways and proceeded by trial and error until the level seemed correct. Checking later with test tones, I was pleased to find that I wasn’t far off the mark. My Logitech X-230 computer speaker system has separate controls for volume and subwoofer balance and can sit right beside my keyboard. As it turned out, this was only thing I liked better in the Logitech than in the Orb Classic One.

The Booster Mini’s wafer-like remote control is easy to lose. If you use the Booster at your computer, you can easily reach over to adjust it. The remote will come in handy only if you’re using the Orb system in a dedicated listening room or home theater.

When I started listening to the Orb Classic One, I was astonished at the quality of the sound. This system didn’t sound like any computer-based satellite-subwoofer setup I’d ever heard; it sounded like a fine audio system. I began with my usual first reference track: Ataulfo Argenta and the London Symphony’s recording of Chabrier’s España (16/44.1 ALAC, Decca). It sounded open and airy, which surprised me -- the Mod1 has no tweeter. But it could still reproduce all the highs, and its single driver meant that the transition from the midrange to the highs was exceptionally smooth. The pizzicato strings had bite, and the castanets were crisp and clean, even though they were (correctly) placed at the back of the orchestra. Cymbals shimmered. The subwoofer allowed the mezzo-forte bass-drum thunks in the transition to the ending to be rock solid, with good attack and a resultant boom.

Encouraged by that example of good bass response, I played organist Michael Murray’s Encores à la Française, recorded in Boston’s Symphony Hall (16/44.1 ALAC, Telarc). Couperin’s Chaconne in G Minor gave the entire system a workout. The deep pedal notes thundered out through the Orb system with accuracy and presence, and the interludes for the higher pipes were pristine, all the different tonalities clearly etched.

Turning to jazz, I tried Charlie Haden and Carla Bley’s The Ballad of the Fallen (16/44.1 ALAC, ECM). "Els Segadors" begins with a brass choir playing funereal music. A little over a minute in, the melody is doubled on bells, with the occasional struck cymbal. It all sounded very clean and balanced through the Orb Classic One. About 2:20 in is a transition to a double-bass solo by Haden. The blend of outputs of satellites and sub was absolutely smooth.

Eiji Oue and the Minnesota Symphony’s recording of Rachmaninov’s Symphonic Dances has become one of my favorite demonstration pieces (24/96 AIFF, Reference/HDtracks), and it sounded wonderful through the Orbs: open and transparent, yet with enough focus to do justice to the complex orchestration. And when the bass instruments were present, the Super Eight again proved its solid worth, providing not only punch, but very good tone and reproduction of instrumental timbres. I concluded that this system is one of the smoothest I have ever heard for computer augmentation.

My computer is in a smallish room; I doubt the Orb Classic One system would work permanently in a large space without being expanded. But one of the special things about Orb systems is their flexibility in terms of expansion. Orb also offers generous warranties and flat-rate shipping (currently $9). Their staff knows their products and can answer any question you might have and make knowledgeable recommendations. And if you want even lower prices, try the Orb Outlet, where Orb sells speakers with slight cosmetic imperfections.

The Orb Classic One system represents great value for the dollar. It can’t outperform my main system’s MartinLogan array in HF extension or detail, it won’t reproduce the very deepest bass as will a large floorstanding loudspeaker or a subwoofer with a 12" cone, and its absolute loudness capability is limited compared with that of full-range, multi-driver loudspeakers. But it costs only a tenth as much as my MartinLogans, and every sort of music I played through it sounded musical enough to leave my Logitech system in the dust. If you spend a lot of time at the computer, this system might be very appealing. If you don’t spend that much time at the computer, the Classic One might entice you to do so.

You can’t judge Orb speakers by their sizes. They have a lot to offer, and at prices most people can afford. It’s champagne on a beer budget. A big thumbs up!