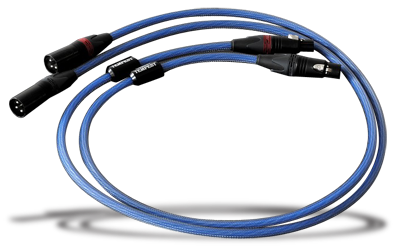 Darwinism is more than 150 years old, and while it serves as a cornerstone of modern biology, it has not found universal acceptance. Irrespective of its 19th-century origins, however, the notion of evolution manifests itself in today’s world with a rapidity that is difficult to keep up with. Divorced from its biological underpinnings, the evolution of modern technology is such that radical new hardware, software, and Internet services seem to appear every few months. Companies like Google, Facebook, and Twitter have harnessed ideas and methodologies that are purely derivative, and repurposed them in such a wildly popular fashion that the companies’ names are now more often than not used as verbs.

The high-end audio industry has yet to see an explosion of innovative new products and technologies in the same vein as the rest of the technology sector. For a series of reasons, this has been true for some time, and may well continue for the foreseeable future. By their nature, audio cables, as a generality, tend to evolve at a downright leisurely pace. Even if one product is not wildly different from another, however, it is refreshing to see new perspectives on cabling. As is so often the case, today’s startup may well be tomorrow’s industry leader.

The British are coming here

The genesis of almost any endeavor that results in a product being brought to market is usually one of two initial thoughts: “I can do it better” or “I can do it cheaper.” Building on founder Daniel Hassany’s engineering background and metallurgy experience, Dynamique Audio, based in East Sussex in the UK, was born from the former. Generally dissatisfied with the cables available to him for his own audio applications, Daniel took it on himself to build the cables he wanted to see in the marketplace. As his cable designs began to travel beyond his own listening room into those of his friends, he decided to create Dynamique, which in its nascence offers 36 different cable models.

Dynamique sent along a series of cables for my system that arrived in bespoke boxes and paper wrapping. Combined with the cables’ colorful appearance and robust construction, it’s a nice touch to see packaging that is something more than an afterthought but that doesn’t approach the garishly unnecessary. Present were: 2m runs of Cyclone ($525 USD) and Caparo ($1225) speaker cables, a set of 1m Tempest XLR analog interconnects ($390), a 2m Starlight USB digital interconnect ($495), and three 2m Horizon power cords ($410 each). My discussion of the Caparo speaker cables appears below; the remainder of this review is devoted to the Cyclones. 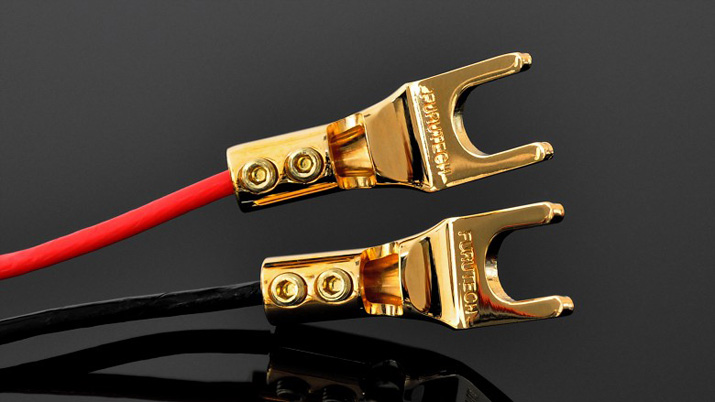 Dynamique prides itself on using liberal amounts of high-quality materials in its various products, without regard to their price. The Cyclone speaker cable features two 12-gauge silver-plated copper conductors, Teflon and Kapton dielectrics, and gold-plated Furutech terminations. The more expensive Caparo speaker cable is a hybrid: two 20-gauge solid-silver conductors and four silver-plated copper conductors, with two each of 18- and 19-gauge conductors, all terminated with WBT Nextgen connectors of oxygen-free copper. 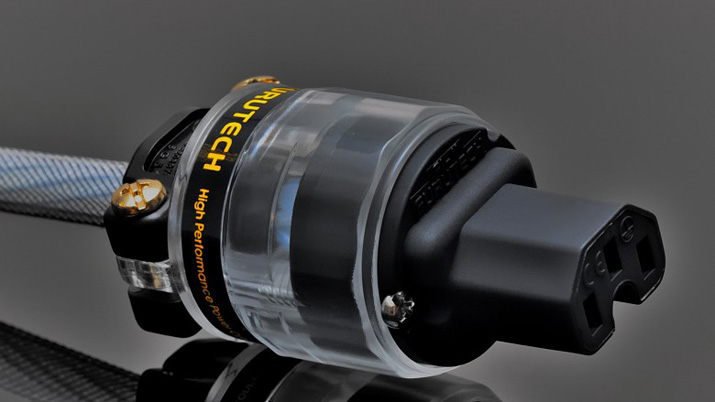 Both the XLR and USB interconnects provided also use this hybrid conductor design, with 24-gauge pure-silver conductors present in both models. The Firelight USB cord adds 20- and 22-gauge conductors to the mix as well. The Horizon power cords snake six 18-gauge silver-plated conductors around a 16-gauge silver-plated earth conductor, all of which are connected to substantial Furutech connectors on either end. Purely on the basis of appearance and feel, Dynamique’s cables appear to be of the highest quality, belying the fact that these are the company’s first mass-market products.

The remarkably unstaid British cables replaced in my system Nordost’s similarly priced Blue Heaven line of cables, which hail from Paul Revere’s home state of Massachusetts and were recently in for review. The Cyclone and Caparo speaker cables connected my Mirage OMD-28 omnidirectional speakers to my Krell KAV-300il integrated amplifier, while the Tempest XLR interconnects linked the Krell to my Benchmark DAC1 USB digital-to-analog converter. The Firelight USB cable bridged the Benchmark with my iMac and MacBook Pro computers, which played Apple Lossless files through iTunes and 24-bit/96kHz FLAC files via Songbird.

From Britain, with bass and bluster 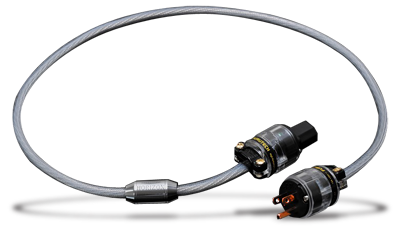 Unlike speakers and amplifiers, cables don’t tend to have strong sonic personalities. Different sets of cables will not sound dramatically different from one another unless they are either poorly designed or constructed, or occupy opposite ends of the price continuum. Dramatic, of course, is a relative term. In my experience, a set of properly executed cables will differ from similarly priced competition in subtle but audible ways. Identifying these nuances, then trying to match cables with the rest of the system, is what makes this hobby so fun. Or frustrating. It depends on the day.

Dynamique’s offerings were no different in this respect, and that is emphatically a good thing. These cables may be among Dynamique’s first commercial efforts, but they didn’t sound like freshman efforts. Indeed, the British cables possessed some convincing qualities.

“The Other Side,” from David Gray’s A New Day at Midnight (16/44.1 ALAC, RCA), is a depressing piece of music, and one of the first I played once the Dynamiques began their short stay with me. Gray addresses the emotional wreckage following his father’s death and a failed romantic relationship, and his voice, particularly toward the end of the song, is pregnant with sorrow. Through the Dynamiques, the sibilance on the trailing edges of his voice was incisively passed along. This preservation of detail, without any softening or rounding of transients, was characteristic of everything I played through the cables.

This was particularly evident in heavily processed electronic music. With the potential for deliciously crisp synthesizers on tap, the cables invited exploration of my collection of relatively obscure ambient and industrial electronic music.

The foundation of “Dorset Perception,” from UK-born Sasha’s dynamic mix Involver (16/44.1 ALAC, Global Underground 1), is a variety of different synths, over which are layered various strings and vocals. The theme pulses along, meandering from one direction to another; the Dynamiques kept everything neatly sorted, with a soundstage that sat squarely between my Mirages and extended somewhat beyond my front wall. Beyond their soundstaging abilities, however, the cables hinted at what turned out to be their defining characteristic: seriously punchy bass. 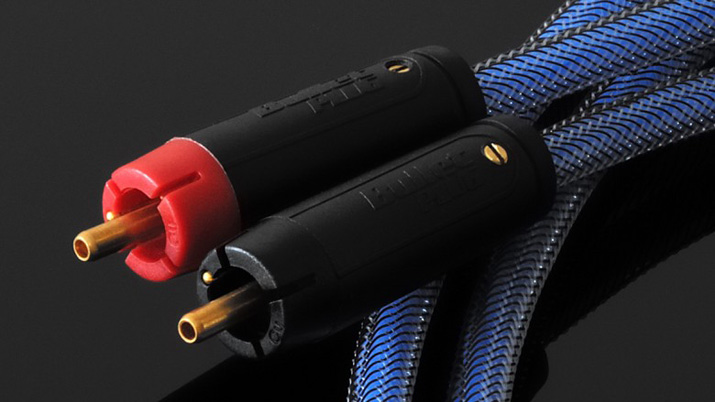 Londoner William Orbit’s “In a Landscape,” from his Eno-esque Pieces in a Modern Style (16/44.1 ALAC, Warner Music), is a modern interpretation of John Cage’s release of the same name. It begins meekly, with a vacillating electronic tone that is quickly underscored by a deep bass line that continues for the rest of the piece. While synth lines are not exactly laden with detail, plumbing the sonic abyss with taut precision is a challenging proposition that requires a delicate balance of speed, extension, and accuracy. The Dynamiques handled the lower registers with aplomb. Without question, the term “bass shy” will be applied to these cables only when the smallest of minimonitors is used.

“Endless Skies,” from the London-born VNV Nation’s Matter+Form (16/44.1 ALAC, Metropolis), highlights lead singer Ronan Harris’s distinctive voice, its coarse and gravelly character rendered in an engaging and compelling manner. VNV Nation’s albums are usually dark, somber affairs, with commercial-strength synthesizers and cutting transients that work in tandem to couch Harris’s thoughtful, speculative lyrics. Tonally, they lean toward the bright side of neutral, something that I found the Dynamiques slightly accentuated.

The Dynamique cables vied for time in my system with the Nordost Blue Heavens. The colonial cables ring in at around the same price, but their visual and sonic presentation could not be more different. Whereas the attractive newcomers from England weren’t short of personality, exhibiting a bass-rich, detail-oriented acuity, and with obvious attention paid to the cables’ appearance, the Nordosts tread on more conservative ground. Curiously, then, the Dynamique upstarts with the stereotypically brash American personality hail from south of London, while the more sensible, relaxed, dignified Nordosts were born just outside of Boston.

The blue Nordosts cast the widest soundstage I have heard in my living room. They allowed my omnidirectional Mirage speakers to sound positively enormous, extending from beyond the Mirages’ outside baffles to well, well behind my front wall. Their ability to faithfully paint a recording space trumped that of the Dynamiques, whose soundstage boundaries were more confined, and fell a little short of convincing. Moreover, the Nordosts portrayed music with a relaxed, transparent quality. Orchestras emerged from deeper in the soundstage than through the Dynamiques, and rang with a more rounded and organic feel. The New World cables, then, excel at macrodynamics.

If the Nordosts are landscape artists, then the Dynamiques were most at home with portraits and still life. The British cables voiced more detail and resolution than the Blue Heavens, consistently offering music that was more focused and attuned than their Yankee counterparts. Male and female voices alike were finely delineated with scalpel-like finesse, whereas the Nordosts tend to kindly round off voices in a slightly more diffuse manner. In contrast to the more recessed sound of the Blue Heavens, the Dynamiques were more forward -- which nicely complemented my laid-back Mirages.

Which set of cables is better? Neither. Both. Choosing between the Dynamiques and Nordosts is like choosing between an Edward Weston photograph and one by Ansel Adams; which you’ll prefer will have more to do with personal preference and accompanying décor than anything else. I suspect tube lovers and those with warmer-sounding gear may well appreciate the Dynamiques’ ability to resolve fine detail without sacrificing the soul of their music, while those with tonally cooler, more analytical systems will find better synergy with the Nordosts.

Whether examined in the context of nature or of the audio business, Darwinism illuminates the principle that basking in one’s success for too long leaves one exposed to competitors. While the word new used to engender feelings of resistance and suspicion, these days the new is often very good, and worthy of our open-minded consideration. Dynamique Audio’s offerings embody this. Their cables exude quality and provide copious amounts of resolution. I expect that they will please many listeners . . . on both sides of the Atlantic.

Residing above the Cyclones in Dynamique Audio’s speaker-cable line are the Caparos ($1225 per 2m pair, spade or banana connectors). The robust red cables are more than twice as expensive as the Cyclones, and while the familial resemblance is striking, they predictably produced better sound than their little brothers. Their hybrid conductor design, which combines high-quality silver-plated copper and pure silver conductors in addition to WBT connectors, builds on the Cyclone’s performance in a number of ways.

The primary improvement was in soundstaging, which expanded in every direction. The Caparos sounded significantly less restrictive than the Cyclones in that regard, with instruments resounding in seemingly much larger spaces. Reduced, too, was the brighter tonal balance I heard from the Cyclones. When combined with even higher levels of accuracy and transparency than were present with the Cyclones, the Caparos became properly compelling cables with many strengths and no conspicuous shortcomings. While Dynamique offers more expensive speaker cables, I think the Caparos offer substantial performance that many listeners could be content with for quite some time.